Snakes Can Kill Without Venom 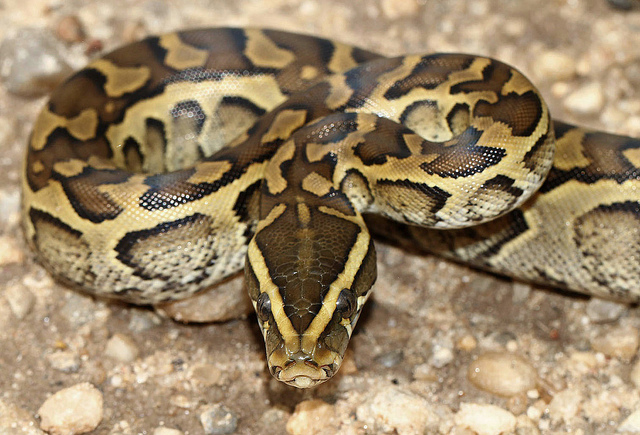 A snake escaped from a pet shop and killed two children in the Canadian province of New Brunswick, police say. The victims, ages 5 and 7, were staying overnight at a friend’s apartment above a pet shop named, “Reptile Ocean.”

Two young boys, ages 5 and 7, who were sleeping at a friend’s apartment above an exotic pet store were strangled by a python that escaped its enclosure in the Canadian town of Campbellton, New Brunswick, the Royal Canadian Mounted Police said Monday.

“The preliminary investigation has led police to believe that a python snake escaped its enclosure in the store sometime overnight,” said Constable Julie Rogers-Marsh. Police were notified about 6:30 a.m.

A former employee of the pet shop told the National Post that the snake was an African rock python, the continent’s largest snake, which can grow to 20 feet long. In the wild, African rock pythons feed on monkeys, antelopes, warthogs and even crocodiles. In suburban areas, their prey includes dogs, goats, rats or fowl. They rarely attack humans, but when they do, the victims are usually children.

The reptile has been captured by police; not before leaving the town of around 7,000 people, in far eastern Canada, “is in shock,” said Campbellton Deputy Mayor Ian Comeau. Comeau also stated that the snakes have only been imported legally since 2009.

The FaceBook page for Reptile Ocean, states it is an exotic pet store “open to the public for purchase and viewing.” It opened in 1995 and is categorized as a “noncommercial zoological gardens.”

In January, the Florida Fish and Wildlife Conservation Commission held a month-long competition to capture and kill invasive Burmese pythons in the Everglades. Florida wildlife officials say African rock pythons pose an even bigger threat to the state and are more dangerous than their Burmese cousins.

“This is just one vicious animal,” Kenneth Krysko, a herpetologist at the Florida Museum of Natural History in Gainesville, said in a 2009 National Geographic article. He said African pythons are “so mean they come out of the egg striking.”

Krysko goes on to say, “The African snake is a constrictor. Lacking poison, it kills animals by encircling and literally squeezing the life out of them. Florida wildlife may not be the only creatures at risk. In Africa, rock pythons are known to have attacked humans, hidden in a Florida swamp, he added, the African python “could strike you and you wouldn’t even know it was there.”

Africa’s largest snake is found in a variety of habitats, from forests to near deserts, although usually near sources of water. The African rock python kills its prey by constriction and often eats animals up to the size of antelope, occasionally even crocodiles. The snake reproduces by egg-laying. Unlike most snakes, the female will protect her nest and sometimes even her hatchlings.

This snake is widely feared even though it only very rarely kills humans. Although the snake is not endangered, it does face threats from habitat reduction and hunting.

The African rock python’s body is thick and covered with colored blotches, often joining up in a broad, irregular stripe. Body markings vary between brown, olive, chestnut, and yellow, but fade to white on the underside. The head is triangular and is marked on top with a dark brown “spear-head” outlined in bright yellow. Teeth are many, sharp, and backwardly curved. Like all pythons, the scales of the African rock python are small and smooth. Those around the lips possess heat-sensitive pits, which are used to detect warm-blooded prey, even in the dark.

Although this snake is known to rarely eat humans it sure has no problem killing them. It somehow managed to escape its living arrangements at Reptile Ocean and kill two small children in New Brunswick, Canada.