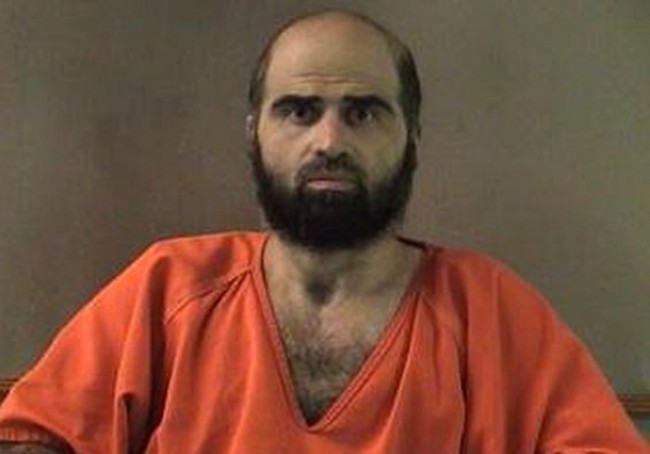 Major Nidal Malik Hasan is on trial for killing 13 military personnel and wounding 30 others as they prepared to deploy to Afghanistan. The soldiers were completing routine checkups when Nidal entered the facility and committed the worst mass shooting in American history. Hundreds of unarmed soldiers were in the facility waiting for vaccines and other pre-deployment services during the November 2009 attack.

Nidal denies that he committed the killings at Fort Hood Texas, but witnesses identified him as the shooter. He is charged with 13 specifications of premeditated murder and 32 specifications of attempted murder. Jurors were selected from officers around the country who will determine Nidal’s fate. Thirteen officers will make up the pool with ranks of major or higher.

In order to render the death penalty the jury must make a unanimous conviction of murder on the part of Nidal. A three-quarter conviction for attempted murder is needed from the panel to substantiate the charge. Nidal’s plea of innocent will be decided by his jury of peers and his fate will be determined on the weight of the evidence in the case.

Major Nidal Malik Hasan committed a characteristic assassin type deed at Fort Hood and will stand trial in Texas. Officials are seeking the death penalty in the case and if convicted appeals will likely begin extending resolution for years. Pundits have cited the poor track record of the military for avoiding overturned sentences.

Court records have revealed that in the last 30 years, 11 of 16 death convictions by military courts have resulted in overturned sentences. The military is less likely to put to death active duty soldiers as evidenced by the trend. It would be a travesty of justice if this held true in the case of Nidal Malik Hasan.

“The public looks and says, ‘This is an obviously guilty defendant. What’s so hard about this?’” said Geoffry Corn a professor at the South Texas College of Law and a former military lawyer. “What seems so simple is in fact relatively complicated.”

Nidal has repeatedly delayed the trial start date with various requests. This action could be fertile fodder for an appellate court. The slightest mishap could resort to an overturned decision. Nidal grew a beard while in custody claiming it was his faith, but due to military rules a judge ordered it forcibly cut. An appeals court stayed the order and removed the judged. The records will be examined closely in a military appeal. “A good prosecutor, in military parlance, would be foolish to fight only the close battle, “said Corn. “He’s got to fight the close battle and the future battle. And the future battle is the appellate record.”

Nidal has dismissed lawyers consecutively that had been assigned to him. He plans to represent himself in the upcoming court case. Major Nidal Malik Hasan is trying to go on trial with the defense that his assassin like killings were in “defense of others” (Taliban). Col. Tara Osborn, trial judge, has denied this strategy put forth by Nidal.