Game of Thrones “Mother of Dragons” was Born in Russia? 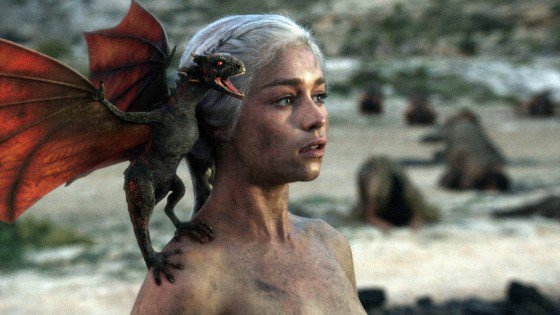 According to Russian President Vladimir Putin’s PR team, the British actress Emilia Clarke, the “Mother of Dragons” from the television series Game of Thrones, was apparently born in Russia. A photograph of the “Mother of Dragons” appeared on an online flyer in an anti-rape campaign of Putin’s candidate for mayor of the central Russian industrial city of Yekaterinburg, the third largest Russian city. The picture was used without her permission, as an illustration of a 24-year-old Russian girl Anya.

The mayoral campaign for Jacob Silin, 54, member of Vladimir Putin’s political party “United Russia”, sent a somewhat poetic message under the photo of this very talented, and more than charming British actress:

“I suddenly noticed that for the last couple of years I’m not afraid to walk at night in Yekaterinburg. I now have confidence that the city is safe, that no-one will attack me or rape me. It’s so cool … There are only few people on the streets, the streets have lights, the city is fresh and incredibly beautiful. Especially after it has been raining.”

The message was used as a part of the political regional program 2013-2017 named “Столица” (“Capital”) which aims, among other things, to support repairmen of city streets and courtyards,  and to expand city’s transport networks. The problem is that the image was used without the knowledge or consent of the “Mother of Dragons”. If the intention of Silin’s PR team was to attract attention to the campaign, they certainly did a god job. But we are not sure that negative attention is much desirable, especially when it comes to the politics. The misuse was instantly spotted by Russian Internet users, who posted a huge number of negative comments on the website. According to the Mail Online, one of the bloggers wrote:

“’The fact is that in the first ten pages of Google picture search while looking for “beautiful young girl”, “beautiful girls” or “young beauties” certainly gives a lot of photos of Emilia Clarke and Selena Gomez. ‘But United Russia’s PR people at least know who Selena Gomez is.’

Apparently, the media team of the “United Russia” party knows who Emilia Clarke is, as they issued a statement that they used the photo of famous actress on purpose, “to make it clear that this is a fantasy.” With recognition that this was not done clearly enough, they also admitted that the use of a photo was not authorized by the star of HBO’s “Game of Thrones.”

Maybe Daenerys Targaryen – the charismatic leader of a Khalasar, in the television series – inspired the marketing team of the “United Russia” party, due to their city’s history in which this crossroads area between Europe and Asia was populated by various nomadic groups. Or maybe the inspiration came from the fact that “Mother of Dragons” is recognized as a liberator of the oppressed. Or to some her stunning beauty resembles the beauty of Russian girls. But using her image, without her consent, to convey a message in a political campaign is at least undignified, even if the Game of Thrones “Mother of Dragons” had been born in Russia.

2 Responses to "Game of Thrones “Mother of Dragons” was Born in Russia?"