Scott Disick is the Father of Mason Disick! 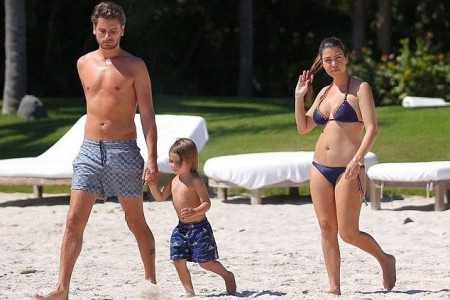 This morning Kourtney Kardashian revealed that DNA has proven that Scott Disick is indeed the father of her three year old son, Mason.  On August 8th, Michael Girgenti filed documents with LA County Superior court requesting DNA testing to prove the paternity of 3 year old Mason Disick.  He also sought joint custody.  He claimed that he and Kourtney had ”unprotected vaginal sex,” and that during intercourse  he had “ejaculated inside [Kourtney’s] vagina,” in 2009 when she and Scott Disick were separated.

Kourtney Kardashian released this statement regarding the DNA outcome, “After three-and-a-half years of rumors and lies being spread by an individual I met briefly at a photo shoot, I am setting the record straight that Scott is Mason’s father. While it saddens me to have to address these ridiculous lies—especially when the truth was never in doubt—this story must be put to rest.”

Michael Girgenti has refused to accept the test results and has even accused the Kardashian clan of tampering with the results. “We don’t trust the results and believe it could have been fixed [and we are] still going to court to fight for court ordered results.” Girgenti’s spokeperson shared with the press.

According to Kourtney Kardashian’s attorney, Todd Wilson, Girgenti has ulterior motives. “This individual has been selling false and fabricated stories to the tabloids for years about Kourtney Kardashian and her son, Mason. Scott Disick is Mason’s father. . . we are informed that this individual has been seeking to get paid to publish his ridiculous pleading. . .His claims are absurd and this is simply another shameful attempt to gain publicity and profit from fictional stories about my client.”

Kourtney Kardashian is the eldest sister of the famed Kardashian clan whose members include socialite and business woman, Kim Kardashian and Khloe Kardashian Odom.  Kourtney’s mother is Kris Jenner and her father was the late attorney, Robert Kardashian Sr., who was a member of the infamous dream team that defended O.J. Simpson (a friend of the Kardashian family) against charges that he murdered his ex wife, Nicole Brown Simpson and Ron Goldman.

Kourtney has risen to fame as part of the reality show, Keeping up with the Kardashians. The reality show follows the lives of the three sisters, their mother Kris, their stepfather, Olympian Bruce Jenner, and other members of their extended family.  She and her younger sister, Khloe, have starred their own spin off series, Kourtney and Khloe take Miami and Kourtney her other sister, Kim, have starred in two series, Kourtney and Kim Take Miami and Kourtney and Kim Take New York.  Kourtney and her two sisters are co owners of the D-A-S-H boutiques which have locations in New York, LA and Miami.  The sisters also have a clothing line, a jewelry line and a skin care line. Kourtney and her sisters have also written a book together, titled, Kardashian Konfidential.   Kourtney Kardashian’s net worth has been estimated at 12 Million.  She has been dating Scott Disick since 2006 and they have two children together, Mason, 3, and Penelope Scotland, 13 months.

Scott Disick is the Father of Mason Disick! added by Karen on August 16, 2013
View all posts by Karen →

2 Responses to "Scott Disick is the Father of Mason Disick!"