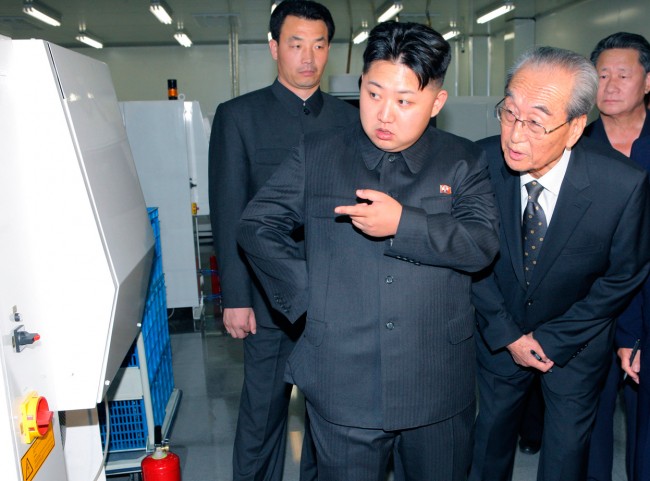 Pictures began to surface showing the leader of the North Korean nation visiting a local factory and reviewing their newest technological edition; smartphones. Kim Jong-un claims the devices are domestically made and no imports were received. A claim others are doubting. The Telegraph states technology outlets like North Korea Tech and Tech in Asia blogs are suggesting “the same building has been used to stage bogus images of Kim Jong-un and his father inspecting a flat-screen TV factory.”

The phone is named after a Korean folk song, reports CNN and is called “Arirang.” Kim Jong-un stated it was nice to see technology developing in the country from the hands of its own workers. Martyn Williams, the editor of North Korea Tech’s website stated, “Workers are shown with finished products, inspecting them and testing them but no actual manufacturing is shown,” and “they are probably made to order by a Chinese manufacturer and shipped to the May 11 Factory where they are inspected before going on sale.”

Reports surfaced the controversial leader recently heard of the factory producing the “Arirang” smartphone and decided to visit the facility. The phone, reportedly uses Android which alone raises brows based on earlier comments of American companies from Kim Jong-un. The leader praised the features of the phone, states North Korea tech, “How nice to see hand phones being successfully produced with indigenous technology,” he added, ” it is of educational significance in making people love Korean things.”

While the jury remains out on how far reaching the sale of this elusive smartphone will be, it has effectively drawn media curiosity and consumers. Reuters released a photo from the KCNA website on the phone:

It appears the Android powered device is a mid-range option and boasts four different colors. The box and phone looks legitimate but many Asian media outlets are demanding to see the phone in person or even the manufacturing process, which has not been revealed. Pictures from North Korea Tech show workers in scrubs working on computers in one room with the leader and military personnel.

Interestingly, it was Google’s chairman Eric Schmidt who visited the controversial country earlier this year. Bloomberg reports a day after Schmidt’s visit, South Korea suffered a massive cyberattack and investigators looked over to North Korea and their recent visitor. This of course strummed up questions for Schmidt and why he decided to visit the country. Schmidt stated:

North Korea is the last really closed country in the world. This is a country that has suffered from lack of information. The Internet was built for everyone, including North Koreans. The quickest way to get economic growth in North Korea is to open up the Internet. I did my best to tell them this.

It’s no secret that Kim Jong-un has shown tremendous interest in building the technology in his country. The Washington Post wrote that Kim Jong-un was a previous student who studied in Switzerland and had enjoyed his time working with technology. He is also the first North Korean leader to be seen with a smartphone. The technology may be questioned, but the photos certainly create a curious speculation. The leader praised the smartphone factory in his country and alluded to the fact the technology would be only for North Koreans. While not a Galaxy S4, the device is quite remarkable if the claims of creation are legitimate.