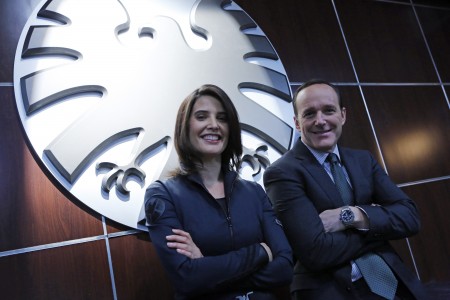 Joss Whedon has become an icon in terms of television as well as the big screen. His 2013 film Marvel’s Avengers Assemble confirmed what Whedon fans already knew after his first foray into feature films with Serenity in 2005. The Serenity film is a perfect example of the Whedon TV curse as it was a fan’s “closure film” for his doomed space series Firefly. Marvel’s Agents of SHIELD, with references to its big screen sibling, may help to break the curse that has plagued Joss’s television programs.

The latest Joss Whedon television project, Marvel’s Agents of SHIELD, opened to strong viewing figures on Tuesday September 24. Considering the show opened against The Voice and NCIS – with a viewer count of 19.5 million – it did very well with a debut view count of 11.5 million.

The new ABC Whedon series ranked first in the designated time slot and amongst the targeted 18 to 49 year-old demographic. Nielsen data supported the number one ranking. Apparently, the new drama enjoyed the strongest opening episode viewing figures of any new show’s debut in almost four years.

There will be those who expect that the television show could suffer from the Whedon television curse. A malady that struck down several popular Whedonesque programs. Joss’s Buffy the Vampire Slayer ran for seven seasons, although it narrowly squeak past cancellation numerous times. Marvel’s Agents of SHIELD could be the next “Buffy” and break Whedon’s TV curse.

The Buffy spin-off, Angel, with David Boreanaz as the vampire with a soul, lasted for five seasons with the last one being the strongest. But the season five upswing, that occurred when James Marsters joined the cast, did not save the show from finishing at the end of season five.

The next two shows developed by Whedon failed to please network executives and both suffered an early cancellation. Firefly, with Nathan Fillion – who was from the Buffy-verse as a major baddy in season seven – as the leader of a rag-tag group of mercenary ex soldiers who operated on the wrong side of the law, was cancelled after only one season. Dollhouse with another Buffy alumnus, Eliza Dushku, limped through two seasons. Dollhouse was given its marching orders before the first season had finished.

While all of Whedon’s television shows were wildly popular with fans, only Buffy had a large enough fan base to ensure that the program kept returning, albeit, a little shakily in the last two seasons. Angel started the trend of having to fight for its life and both Firefly and Dollhouse took too long to find their audience.

Networks refused to let either of the latter two shows have a chance to build a large fanbase.

Joss then approached fans about doing a Firefly movie to give closure to the cast, crew, Joss, and the fans. Dollhouse used its second and last season to bring the show to a unsatisfactory and rushed conclusion. After Firefly and Angel, Whedon then spent his time working on a comic book verse for Buffy and the internet production of Dr Horrible’s Sing-Along Blog.

Fans of the 49 year-old creator of Buffy, were excited when news broke that Joss would be directing the first Marvel’s Avengers Assemble adventure. The same viewers were pleased at the news that Whedon would be working on Marvel’s Agents of SHIELD. But considering his past record on the small screen, that positive fan reaction should be tempered with an eye out for network cancellations.

It does seem as though Joss Whedon was made to pay for his success with Buffy the Vampire Slayer by having his other programs shut down before their time. Hopefully the big screen tie-in with Marvel’s Agents of SHIELD, will break the Whedon TV curse once and for all.