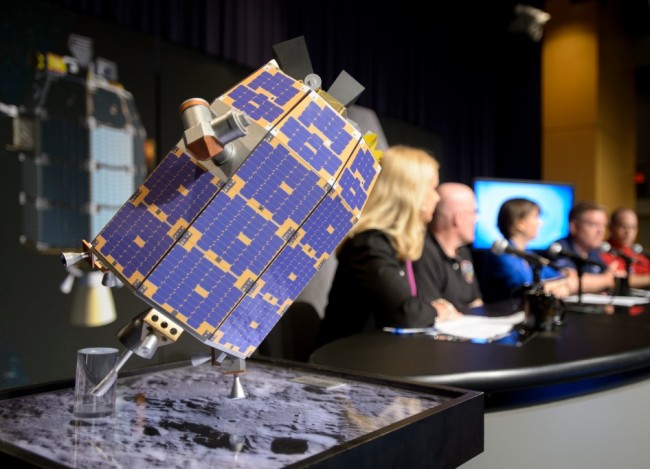 NASA aims to revolutionize the method by which they communicate throughout space, through implementation of a laser transmission system. Theoretically, the new comms system will permit considerable bandwidth, facilitating the return of 3-Dimensional, high definition signals back to Earth. NASA’s preliminary tests are set to center around two-way communications lasers between the Earth and the moon. We take a look at the workings of NASA’s planned mission.

This feat will be achieved using NASA’s Lunar Atmosphere and Dust Environment Explorer (LADDEE). LADEE will be dispatched into lunar orbit, and will begin circling the moon to acquire detailed imagery of the planet’s surface, analyze both atmospheric and surface conditions and investigate climatic influences upon lunar dust particulate.

The LADEE spacecraft is based upon a revolutionary “plug-and-play” design, where production of the spacecraft is more akin to an assembly-line, as opposed to relying upon custom builds. This technique will permit an inexpensive means by which the craft can be constructed, using what they describe as a Modular Common Spacecraft Bus.

The plan is to launch the LADEE spacecraft, Sept. 6, 2013, using the Minotaur V rocket, which was formerly a ballistic missile refurbished for space launch missions. According to a NASA press release, the mission will be divided into nine primary phases:

Simply, the spacecraft will initiate its launch, begin a 24-hour elliptical orbit phase, and then perform a series of maneuvers to achieve a more circular orbit and lower its altitude. Once in the correct orbit, LADEE will commence the Science Phase of the project.

The spacecraft will be fitted with a unique device, called the Lunar Laser Communication Demonstration (LLCD), which has several advantages over the traditional means of communication, which previously involved use of radio frequency (RF) waves. The existing RF system required more power to operate, encountered atmospheric interference and could not transmit anywhere near the same amount of data as lasers.

According to TG Daily, Don Cornwell, LLCD operations manager states the new communications technology will utilize a smaller transmitter device, requires 25 percent less power, is capable of transmitting “… six times more data from the moon…” and is much faster. Essentially, the technology will generate communication capabilities akin to optical broadband networks of Earth.

During the mission, an astonishing amount of data will be transmitted from the moon to Earth and vice versa, examining the LLCD equipment’s capacity to send and receive signals. Millions of bits of data will be bandied back and forth every second, as NASA attempts to demonstrate the technological effectiveness of laser communications. Whether this technique will work, however, is an entirely different matter.

Accurately relaying this data back, over a distance of almost 240,000 miles, to one of the three available ground telescopes is the difficult part of the process, as Cornwell explains:

“This pointing challenge is the equivalent of a golfer hitting a ‘hole-in-one’ from a distance of almost five miles… Developers at the Massachusetts Institute of Technology’s (MIT) Lincoln Laboratory have designed a sophisticated system to cancel out the slightest spacecraft vibrations. This is in addition to dealing with other challenges of pointing and tracking the system from such a distance. We are excited about these advancements.”

LADEE will also feature a number of additional components, aside from the LLCD device. Ultraviolet and visible light spectrometers will enable astronomers to derive the constituents of the lunar atmosphere, whilst a neutral mass spectrometer (NMS) will measure subtle changes to these atmospheric conditions, over the course of multiple lunar cycles.

In addition, NASA are also planning to use Lunar Dust Experiment (LDEX) equipment. The team hope to use LDEX to investigate the moon’s atmospheric dust particles to figure out a longstanding lunar mystery; during the Apollo mission, where astronauts witnessed a glow on the horizon, did ultraviolet light induce an electrical charge in the dust to cause such a phenomenon?

On an entirely separate occasion, NASA’s Lunar Reconnaissance Orbiter (LRO) received an image of the Mona Lisa, but, according to Cornwell, was achieved using a much lower bandwidth of merely hundreds of bits per second and pales in comparison to an optical communications system.

The technology is not entirely new, however, and has been wielded by the European Space Agency (ESA), but on a much smaller scale. The ESA recently performed a geo-mobile mission, where their Alphasat satellite was positioned in low-earth orbit. Alphasat encompasses a wide variety of tools, including an optical comms system, which can transfer data at 2.8 Gigabits per second back to Earth’s ground control. Obviously, NASA are hoping to replicate the same success, but over much more substantial distances.

These lasers will offer astronomers considerable benefit whilst working distant space equipment and rovers. It is imperative that ground control can see precisely what their remote controlled robots can see. Therefore, acquiring high resolution, 3D footage could significantly enhance NASA’s capabilities from ground control. Although NASA’s laser system is designed for communication between the Earth and moon, if the mission is successful, the technology could have applications in many of the team’s other future cosmological endeavors.