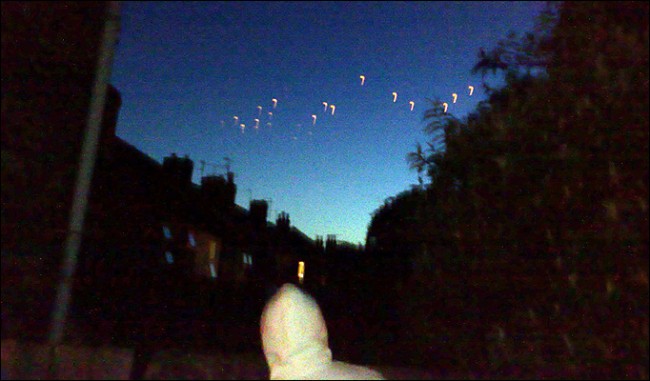 Are the strange sounds heard by people all over the world since 2011 the result of NASA’s Project Blue Beam or a sign of the apocalypse?  Some people believe it could be either scientific research or an impending full-scale alien invasion.

Project Blue Beam is about creating a gigantic Space Light Show with 3D holograms of laser images and sound. With the use of telepathic electronic two-way communication, HAARP wave technology can reach everyone on earth.

The Blue Beam Project is NASA’s most scientific but most questionable theory.

Some people feel that Project Blue Beam is part of a larger conspiracy involving NASA and the formation of a possible religion. This new religion, they feel, might be spearheaded by the “Antichrist” and could usher in a type of New World Order. Technological advances may play a role is this so-called “second coming.”

Strange sounds are being researched by scientists to provide an explanation. The latest sound recorded in South New Jersey was described as a hum accompanied by shaking that came from Galloway, Franklin and Wild Crest, which is about 100 miles on the coast and inland. However, this could be easily explained by seismic activity but no reports were taken from USGS. The website Discovery.com reports:

According to a Borneo Post report, the “Sky Roar” had been heard over Kota Samarahan from around 2am or 3am till dawn on both days. Terrified residents, the report added, described the noises as a “loud hushing” or “snoring” sound. The sounds were also recorded that night, and were later uploaded on YouTube. The Minister of Science, Technology and Innovation has a very simple explanation – it was created by an oil palm factory testing their boiler pressure on Jan 11 and Jan 12.

Researchers and scientists have been unable to pinpoint or confirm the source of these strange sounds, but they believe the hum could have been created by ocean waves crashing over continental shelves that produced vibrations.

Although some of the videos that were uploaded to Youtube were labeled as hoaxes, most of them are recorded by people all over the world.

One of the most famous mystery sounds was recorded in early 1990s by residents in Taos, New Mexico.

A video posted on YouTube called ‘Strange Sounds in Terrace, BC Canada August 29th 2013 7:30am‘ has caused a flurry of activity and comments on social media, but Terrace resident Kimberly Wookey said this is not the first time she has heard these sounds.

Wookey says she first heard the sound in June and describes it as a melody. She thought that somebody was playing bad music. Then, when she heard it again in August, she went for her camera and recorded it for ten minutes.

It’s a very eerie sound if you don’t know what’s causing it. The City of Terrace has taken responsibility for the sound by posting a note on their Facebook page that they were preparing for some Lanfear hill work, and that the noise was produced by a grader blade.

Some people say that all of these sounds have very simply scientific explanations, and that those who believe them to be of supernatural origin are ignoring clear evidence and data which is easily obtained by simple observation. The mind has a tendency to believe what it wants to believe, skeptics say, and belief in ghosts, conspiracies, prophecy and other supernatural phenomenon is caused by the brain’s innate desire to create connections between things which are actually not connected and to make order out of chaos. Similarly, people are able to see “faces” in clouds and hear words in garbled sounds simply because the human brain is hardwired to make sense of sounds and to recognize faces.

What do you think? Are these strange sounds heard all over the world NASA’s Project Blue Bean, a “new world order mind control weapon,” or a sign of the “apocalypse?”  You decide!