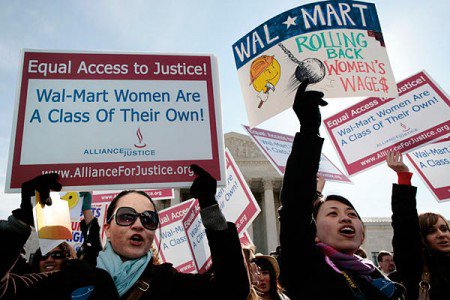 Being the countries largest private employer, with over 4,600 locations, and employing close to 2 million American workers, you would think Walmart would have fair labor practices. Or at least better than what they practice now. It’s time to expose Walmart for who they ‘really’ are.

Have you had a Walmart Super Center built near you? Did you know, on average, for every super center built, at least two local supermarkets, and numerous other local stores will go out of business? Walmart tend to use the ‘bait and switch’ tactic by opening it’s store with ‘rolled back’ prices on their products. Then once they run other stores out, they raise their prices back up, sometimes higher than the stores prices that Walmart initially ran out.

Walmart is the world’s largest retailer, bringing in over $16 billion in profits for the 2012 fiscal calendar year. How can the largest retailer in the US get away with paying most of its employees unsustainable wages at $8.81 per hour? Most of Walmart’s employees are the lowest paid workers in the entire US.  Walmarts CEO, Micheal Dukes’ salary for 2012 was $20.7 million. He even got a 14.1% increase from 2011. Each American employee would have to work 785 years, with no days off, not even holidays or sick days, to earn 1 year’s salary equivalent of the CEO.

Where is the employee’s pay rise? Walmart employees are only asking for a raise so they make a living wage of $25,000 annually, and either no forced overtime, or at least getting the pay and benefits of working overtime.

Tax payers pay an average of $1.7 million per store, or $5,815 per employee, per year for Americans employed at Walmart. This is because Walmart employees are forced to get state-aid assistance for food stamps, medical, and other variables also. The lowest paid CEO is making over 50,000 times that of Chinese workers.

Walmart has not only treated its employees unfairly financially. Employees have also been discriminated against politically, sexually, and racially. In the last election, it was ‘recommended’ that they vote for and against particular policies. Rumors suggested a loss of employment for those not voting as they were told. There were a few people that came forward and said they had lost their jobs because they voted for Obama. Political discrimination is only part of it. Walmart is also said to discriminate racially as well as by gender.

100 employees were arrested in eleven out of the fifteen cities where they protested against Walmart last week. In New York, protestors tried to deliver a petition with over 200,000 signatures for Walmart to provide fair labor laws. Specifically, ‘full time’ hours, increase in minimum wages to $25,000 annually, and to reinstate workers fired from previous strikes. Employees announced a massive, wide spread strike and protest in November, better know as ‘Black Friday.’ Last year’s turn out was okay, they hope this year’s strike and protest will be a larger spread event.

All Walmart employees are asking for is fair labor laws: a liveable wage, benefits for full time work, real ‘full time’ hours, and no discrimination for having different political views, sexual orientation, or for skin color, along with better treatment of product suppliers, workers, and manufacturers.

It’s time to expose Walmart for who they really are!

4 Responses to "Walmart Exposed over Employee Pay and Discrimination"