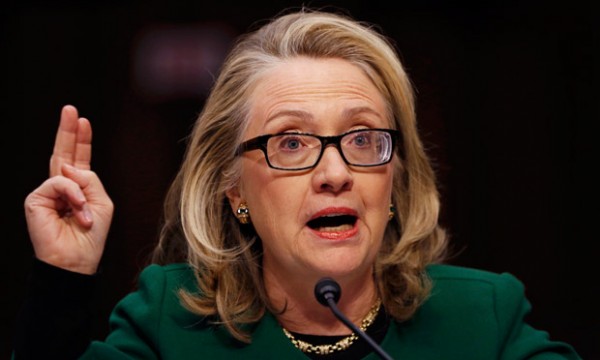 It is a misnomer to believe all women worship at the media’s frenzied level of love for the woman who rode her husband’s coattails to every position. Stop it. She did. And angrily lectured, “It’s not like I’m some little woman standing by her man.” Excuse me, dear, that’s exactly who you are. It was not a “vast right wing conspiracy.” It was indeed, your husband’s cheatin’ heart with you looking the other way while schooling American women on how to live their lives.

Young female voters don’t remember a time when women had to fight for a place not just in the workforce but also for the right to stay home and raise their children without losing their feminist membership card. For some, this pill was a hard swallow. It is not just her views on marriage and feminism that disturb. Some of us believe feminism embodies defending equal political, economic and social rights for women. Basically we get to live our lives just like men as long as we do it in conjunction with the rules according to Hillary and her cohorts.

There was a time when mothers at home with their children were labeled as less by Hillary On High. “I suppose I could have stayed home and baked cookies and had teas, but what I decided to do was fulfill my profession.” Women across the country who enjoyed afternoon cookies and tea were left with mouths agape. Somehow they thought caring for their children was a worthy profession.

As First Lady, disdain for women at home oozed from her every pore. But then she blazed a trail becoming our very first First Lady to be subpoenaed. Left in the wake of her political saber sword were Vince Foster, Jim and Susan McDougal, the Rose Law Firm and Monica Lewinsky.

Monica may not have been an innocent but she was a 22-year-old White House intern entangled with the most powerful man in the world doing what he apparently does best. Democratic political blame from discovery day forward was heaped on Lewinsky. To this day the woman is the butt of jokes. Anyone but Hillary’s husband would have lost his job over the dalliance. Not Bill and Hill. They moved forward, smugness intact. Although nary a woman in America did not feel heartbreak for Hillary’s humiliation at the hands of her husband. Might have been her first bump in the polls

Does she have the capacity? Does she have the temperament to be the president? Granted we’ve had many angry, old white guys as president and the job can probably make anybody a bit bristly, but she’s already angry. It started early. She rebuked Senator Edward Brooke at her college graduation, showing the world not just her chutzpah but her lack of manners as well. Brooke was the speaker before her.

She failed the bar in DC and relocated to Arkansas after passing that bar. No offense to Arkansas but not many people say, “Hey I’m gonna tear up the legal world. I’m packing my bags and heading to Arkansas.” She was touted as an upstart at the Rose Law Firm. Her husband was the state’s Attorney General and then the Governor. I wonder how she got so far so soon.

She is brilliant there is no doubt. Why does she believe she can’t do it on her own? Throughout her career, the way has been paved by her husband’s accomplishments. She is lauded as the first working First Lady. Really? Jackie Kennedy worked at the Washington Times-Herald . Pat Nixon was a high school teacher. Betty Ford danced in Martha Graham’s (yes, that Martha Graham) concert group and modeled. Rosalynn Carter was the Chair of Georgia’s Special Olympics. Nancy Regan was a Broadway and film actress. Barbara Bush was a literacy advocate. Not sure how that qualifies Clinton as the first working First Lady but it is a part her storied history.

She melted cold hearts with her turn as Secretary of State. She hit her stride, showing the world she is a badass world traveler capable of any challenge. Excepting that temper. Eyes blazing, she snapped at a reporter who asked what her husband thought of something. Girlfriend, your husband was a former president. His views will always remain on the table. Though after that Lewinsky thing, anyone can understand your wanting him to be irrelevant for just five damn minutes.

News reports at the time provided her excuse. “There Clinton was in Kinshasa, sweltering away in nearly 100-degree heat, recovering from a broken elbow, expounding on just the sorts of things Americans don’t want to read about when they drink their morning coffee and pick up the paper: wartime rape, illegal mining, the World Bank.

On this, her longest overseas trip as secretary of state, she looked and sounded very much like America’s senior diplomat. Until, that is, she was asked to convey her husband’s opinion on the trade agreement.”

“Now she’s secretary of state and the world still wants to know what he thinks about the World Bank. She’s the nation’s chief diplomat, and he’s the one who gets to save damsels from North Korea’s Mr. Evil,” wrote conservative columnist Kathleen Parker in e-mail. “As secretary of state, obviously, she needs to keep her cool. But as wife of Bill, who can blame her? That little eruption has been a long time coming. The only surprise is that the student who posed the question didn’t suffer any burns,” she wrote.

You’re kidding right? Is there a man alive who would be given this level of latitude at such behavior?

And then there was Benghazi when she screamed, “What difference does it make?” To the widows and families of the four killed and the ten injured, probably quite a bit.

Over and over again, it is an attitude of arrogance, an air of unaccountability. Is this not the very thing we despise most in our politicians? Aren’t we trying to do better? Women consistently speak of angry old white men dictating what will happen in our world. Is an angry white woman of the old guard any different?

Yes, indeed, 2016 may just be the election of women versus Hillary Clinton.

One Response to "Women Versus Hillary Clinton 2016"