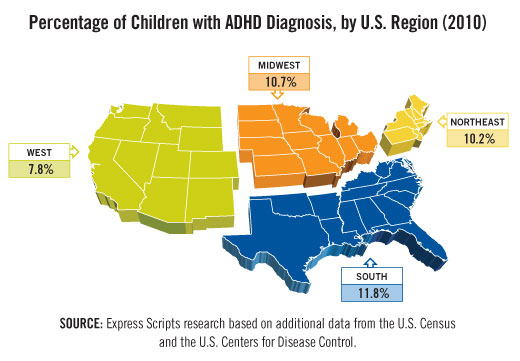 A new study reveals the number of children diagnosed with ADHD has increased by 2 million between 2003 and 2012. ADHD stands for ‘attention-deficit hyperactivity disorder’. There are nearly 1 million more children in America taking medication for this disorder than previous years. This study was conducted by ‘Centers for Disease Control’.

While using research from 2011-2012, researchers from the National Survey of Children’s Health calculated the number of children in the US ages 4 through 17 whose parents have reported their receipt of a diagnosis for ADHD from a doctor. This is one of the most common childhood brain disorders. This disorder can persist into adulthood. There are 7 most common symptoms of ADHD the public should be aware of.

The first symptom is the inability to see other people’s needs and desires. Children with ADHD may interrupt others while they are talking and may have trouble waiting their turn. This symptom could happen anywhere such as at home or at school while waiting to play a game.

The second symptom involves keeping emotions. Many children with ADHD may have trouble keeping their emotions in check whether they are good or bad. There may be outbursts of anger or temper tantrums. You may find your child has trouble sitting still.

The third symptom is fidgeting and squirming. Children with ADHD cannot sit still for long. They will try to get up and run around. If they are forced to sit down they may constantly squirm in their chair. Many times a child will start a task then move on to another before finishing that task.

Quickly losing interest is the fourth symptom. At first they may be excited by a project but they will quickly lose interest. They will then look for the next interesting thing to do.

A fifth symptom is the lack of focus with a child. ADHD will make paying attention difficult for children. This happens even if they are being talked to one on one. They may tell you they heard you but if you asked them to repeat back what you had said, they won’t be able to.

The seventh final symptom of ADHD is day dreaming. ADHD may cause children to stare in to space and ignore what is going on around them. The stereotype for ADHD is a child being loud and rambunctious but many are the complete opposite. Some children with ADHD may be much quieter than the other kids.

Unfortunately between the fall of 2011 and spring of 2012 there was a shortage of ADHD medication. Keep in mind that ADHD is not only in children. Many adults have this disorder and need medication as well. There is evidence to suggest this disorder has a strong genetic basis. This theory was developed by observing identical twins. Identical twins share almost 100 percent of the same genes. In 2010 researches at Michigan State University studied 22 various studies of twins. The researchers found that the traits of hyperactivity and inattentiveness were highly inheritable. However, the theory of ADHD being hereditary is still in theory. The ADHD epidemic is increasing every year.