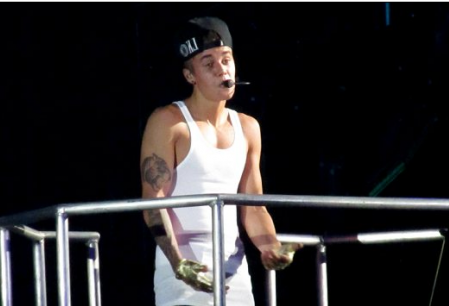 Justin Bieber, his Argentina attitude and his brush with sex stars has enabled the Canadian pop star to make the headlines yet again while on the South American leg of his world tour. Justin’s behaviour in Brazil consisted of visiting brothels; spray painting graffiti on a hotel wall and storming off stage after being hit by a bottle toward the end of his Rio de Janeiro concert.

Since his arrival in Argentina, he has come down with “food poisoning,” and mopped the stage he was singing on with the national flag of the country he was performing in. Video’s have shown up on YouTube showing the tween fans of Argentina who were in hysterics when the star did not complete his November 10 concert due to illness caused by dodgy food.

The 19 year-old singer tweeted apologies to his fans along with an Instagram selfie of himself being treated with an intravenous drip for food poisoning. He also tweeted an explanation about the flag incident.

Bieber said that when the flag was thrown on stage during his concert – will fans never learn, Justin has said repeatedly not to throw things – he saw a bra and what he took to be a t-shirt. Never mind that the owner of the shirt must have been the size of King Kong. The pop star swore that he would never have desecrated the Argentina flag by rubbing it on the floor, had he realized.

It has also been revealed that Justin Bieber`s concert equipment was impounded in Argentina after a photographer alleged that he had been beaten up by one of his bodyguards. Local judge Maria Giraudi ordered that the equipment be held after the victim, Diego Pesoa filed for damages. The photographer claims that bodyguards hit him and caused damage to his personal equipment when Justin was exiting a Buenos Aires nightclub called Ink.

In a case of “deja vue” Diego said that the bodyguards acted after Bieber ordered them to beat him up before getting into his van. According to a legal source in the country, Bieber’s concert equipment; which includes costumes, lighting and audio equipment have been impounded at Ezeiza International Airport for 30 days.

Justin Bieber’s Argentina attitude and his cavorting with sex stars (we are assuming that there had to be more than one) has insured that he continues to make headlines. It looks like no matter which country the singer is in, he keeps getting breaks from law enforcement officials. It will be interesting to see what he will do to top his South American antics.