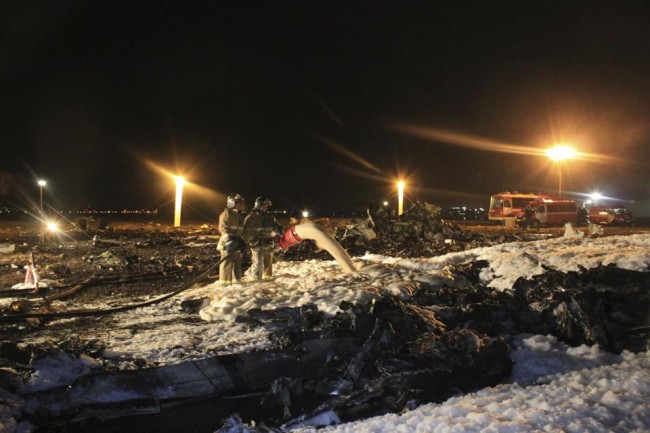 A plane crash is everyone’s worst nightmare. It was the evening of November 17 when a Boeing 737 flying from Moscow to Kazan, Russia, tragically touched the ground at the Kazan airport and exploded claiming lives of 50 people on board. It was raining since the morning on the wheat, rye, and barley fields on the outlines of Kazan near the airport, but weather conditions, though far from ideal, were hardly the cause of disaster. While the Russian investigative committee gives two possible reasons that might have led to the plane crash in Kazan – pilot error or technical defects of the aircraft – passengers that flew on the same plane a few hours earlier questioned the reliability of Russian planes. They talk about the 10 terrible minutes they all experienced during a heavy landing in Moscow; the plane was madly vibrating, shaking from right to left, from up to down as if the wind was controlling the jet. The lights were off and some chairs were non-functioning, they say. Nevertheless, a few hours later pilots took the plane off to Kazan. It was a flight toward their deaths.

The Boeing 737-500 that served Tatarstan Airlines was supposed to be off service some time ago. It flew for 23 years. It made its first flight in 1990, and since then changed many hands and logos. It belonged to French Euralair Horizons, Air France, Uganda Airlines, Brazilian Rio Sul, Romanian Blue Air and Bulgaria Air. Tatarstan Airlines bought it in 2008, after 18 years of service. In 2012 Tatarstan Airlines Director General Aksan Tiniyatullin promised to withdraw the plane from operation in an interview given to ITAR-TASS. It was not done despite the terrible accidents that had already happened.

The first accident occurred in Brazil in 2001 when the plane was landing at the airport of Belo Horizonte, local news agencies report. Due to the heavy rain the plane could not reach the landing strip and touched the ground earlier breaking a left undercarriage. It was carrying 102 passengers and 6 crew members that day. Thankfully, they all were safely evacuated.

The second one happened quite recently, only a year before the final plane crash. In November 2012, the aircraft made an emergency landing in Kazan at the same airport shortly after take-off when the jet’s emergency systems reported depressurization of the aircraft. It was in the air for only 20 minutes. Happily, not a single one of the 78 passengers was harmed during the accident, unlike like last Sunday, when there were no survivors.

The plane, carrying 44 passengers and six crew members, exploded after it fell on the ground 150 meters from the landing strip at Kazan International Airport. It was the second attempt to land. The first one was unsuccessful. After pilots turned the plane to the second round they reported some technical problems, but did not have enough time to change anything. The fire caused by the explosion was extinguished only in the morning, according to eye witnesses. Everybody on board was dead. There were two small children among the passengers. Irek Minnihanov, the son of President of Tatarstan, was also on board. He had just turned 23 and had gotten married only three month ago.

November 19 is a day of mourning in Tatarstan for the President and for all the people who lost their loved ones in the plane crash. Though the list of deceased has already been published, causing every heart to tremble in fear of finding familiar names, the process of officially identifying the bodies started today despite the fact that many of the bodies are damaged beyond recognition.

The terrible crash in Kazan once more raises questions of the reliability of Russian planes by many who are hesitant to travel for fear of their safety. In 2012 alone, 30 planes crashed in Russia claiming lives of 114 people, according to The Moscow News. Russia and CIS region have one of the worst overall air safety records in the world. Many planes are really old. The age of retirement for a passenger plane in Russia fluctuates between 25-30 years.

As to Tatarstan Airlines, it is reported that the company has serious financial problems. In 2012 Kazan, airport started a law suit against the company for the 266 million rubles (more than $8 million), service debt accumulated in the previous three years, according to the Business Online. Financial troubles were behind the fact that explosion was so massive as the fuel tanks of the plane were almost full since Kazan airport refused to credit Tatarstan Airlines any longer, and the plane had to fill up its tanks in Moscow.

In 2007, European Union banned Tatarstan Airlines single and charter flights from entering EU zone. In 2011 Russian Federal Agency of Air Transport, Rosaviation, banned all the flights of the company to the EU countries due to a big number of accidents connected with this company’s air craft. Why not ban local flights, then?

Low safety standards leading to overuse of transport facilities are not only affecting airplanes. Everybody in Kazan remembers a shipwreck of Bulgaria in 2011 near the city. Built in 1955 and overloaded with passengers a cruise boat sank in the Kuibyshev reservoir on Volga River killing 122 people, many of them natives of Kazan.

Now Kazan faces new tragedy in the air. It is a beautiful city 500 miles east from Moscow with 1000 year history and unique traditions, including peaceful coexistence of Muslim and Christian populations. Unfortunately, it is marked now with a rash of deadly transport disasters claiming many people’s lives. This last plane crash in Kazan raises questions about the reliability of Russian planes as it looks like the tragedy might have been prevented.