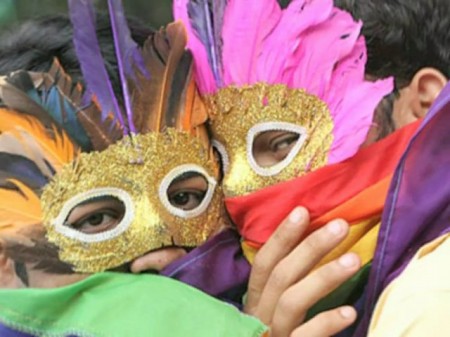 It has become evident that many Bollywood actors do not support India’s Supreme Court decision to repeal a 2009 ruling that legalized homosexuality. Postings on Twitter have revealed just what those actors think about the ruling. The actual relationship between Bollywood and homosexuality is much harder to read. The relationship has progressed slowly in a country like India where the concept of homosexual sex has been taboo for over a century.

In India, homosexuality was made a criminal act in the 1860s when colonial Britain ruled that anyone caught engaging in unnatural, carnal sex with a man, animal, or woman would receive up to 10 years of prison time. In 2009, that law was considered to be a violation to human rights and a law that legalized homosexual intercourse between consenting adults was passed. Wednesday’s ruling was a hard blow for LGBT activism groups in India.

Bollywood actors also took the ruling badly. Some choose to vent on Twitter. A tweet from Poonam Pandey states, “what business does the government have in our bedrooms as long as the fundamental rights of others are not encroached upon?” While a surprised Kunal Kohli stated, “It’s 2013. Laws need to be in keeping with the times and, most importantly, peoples ‘choices’.”

Bollywood, a term given to India’s Hindi-language cinema has produced many Indian films over the past 100 years. The industry has created the traditional Indian love story that it has become known for, while sometimes stirring up controversy with a film that touches on a political or societal issue. The relationship between Bollywood and homosexuality is a new one and the issue has been addressed in some Bollywood films within the last couple of decades.

These films, such as Fire, have caused a lot of controversy, causing conservative groups to riot and protest. Fire was produced and written by Deepa Mehta. Released in 1996, the film was highly controversial. In the film two women involved in dysfunctional marriages with two brothers develop a relationship full of love and passion. The film’s open portrayal of lesbianism was frowned upon by conservative Hindu groups, who stated that “this” was not “traditional Indian culture”.

In Sanjay Sharma’s Dunno Y Na Jaane Kyun (Don’t Know Why), a gay couple has an intimate scene, giving Bollywood its first “gay kiss.” In response to the kiss conservative groups called for censorship of the scene, while one of the lead actors was disowned by his father.

My Brother Nikhil, produced by Sanjay Suri is about an Indian swimmer who contracts HIV. The movie chronicles his ordeals after the news of his infection is released and everyone finds out that he is gay. Nikhil receives a lot of support from his sister and her husband, especially when he is thrown into jail for being gay. The film is based on a true story and is set in India in the 1990s, years before the 2009 rulings.

Girlfriend, Bomgay, and Fashion are some other Bollywood films that display homosexuality. Though the plots range from comedic to very serious dramas all of these films serve in opening Indian society up to homosexuality. This is much needed in a country where progressions in LGBT rights were slow, and have now have taken ten steps back.

One Response to "Bollywood and Homosexuality"