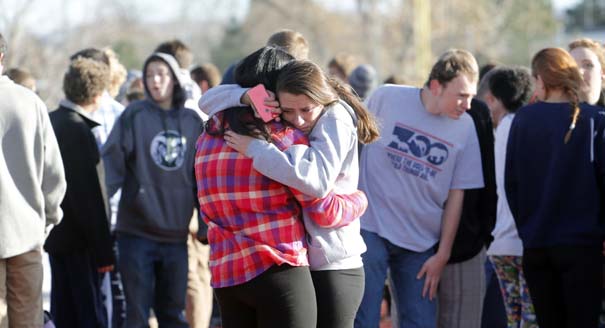 At Arapahoe High School in Centennial, Colorado on December 13, a senior at the school, Karl Pierson, 18, entered  at 12:30 p.m. with a shotgun and injured at least one student. Details are beginning to emerge about the shooting, the shooter and his possible motivations.

Pierson did not conceal his weapon as he entered near the library. Students ran through the halls, yelling “Get out! Get out!” Counselors and staff ran through the halls shouting to close classroom doors. Acting in accordance with training provided and drilled into them after the nearby 1999 Columbine, Colorado incident, known as  “standard lockdown procedure,” students and teachers locked themselves in classrooms and closets. Classroom lights were shut off and classes huddled together on the floor.

Pierson wore tactical gear and carried a shotgun, purchased legally on Dec. 6. He reportedly purchased a large amount of ammunition from local vendors on the morning of the shooting as well and was in possession of three explosives in the form of Molotov cocktails, and a machete.

Upon entering, Pierson called out for his debate coach, Tracy Murphy, who was also a librarian at the school. Pierson reportedly fired a total of 5 shots. He fired one shot down the hallway. He fired a second shot at point-blank range into the face of a senior girl, Claire Davis, who was sitting with a friend. He fired a third shot down the hallway. Pierson set off an explosive in the library. He fired a fourth shot. He then ran to the back of the library and turned the gun on himself. Pierson was dead within 80 seconds of entering the school.

The school’s resource officer, an Arapahoe County  deputy sheriff, went looking for the source of the gunfire, but arrived after Pierson was dead.

Police arriving on the scene followed post-Columbine protocol, immediately entering the school, rather than setting up a perimeter. Among those converging on the scene were a police SWAT team, a fire team, and a bomb squad. Helicopters circled above.

Authorities found Pierson’s body about 20 minutes after the first call alerted them to the situation. Police were at the locked doors of classrooms within approximately 30 minutes and escorted students out of the building with arms raised. Parents met students at predetermined “reunion centers,” a measure intended to lessen their interference with law enforcement.

All schools in the area were put on lockdown, and parents and students were invited to meet at a neighborhood church.

Details emerging about the shooting include reports that Murphy had  suspended Pierson and kicked him off the debate team in September. Pierson had apparently made threats toward Murphy to a group of students at that time. Law enforcement was informed of the threats and the response to them is under investigation. One of the shots was reportedly fired at Murphy but missed. It was reported that Murphy exited the school with an escort when told by other students that Pierson was armed and had been calling for him.

It is generally believed that Davis was not specifically targeted, and that she was barely known to Pierson, if at all. She was critically wounded and remains hospitalized.

Fellow students described Pierson as outspoken about politics, a gifted debater on the school’s team, and a member of the Arapahoe High School track team. He cultivated his speaking skills and sometimes debated teachers. He apparently had friends. Pierson’s character was reported by fellow students as “incredibly humble and down to earth….a little geeky but in a charming way.” Pierson was reportedly a target of bullying, but did not show other students that it bothered him. He aspired to enter the U.S. Air Force Academy.

Arapahoe High School in Centennial, Colorado is attended by approximately 2200 students. It belongs to the same school district as Columbine High School, and is just a few miles from the Aurora, Colorado cinema building where there was a shooting July, 2012. As details about the shooting continue to emerge, there have thus far been no links made to those other nearby tragedies.

One Response to "Details Emerge From Colorado School Shooting"