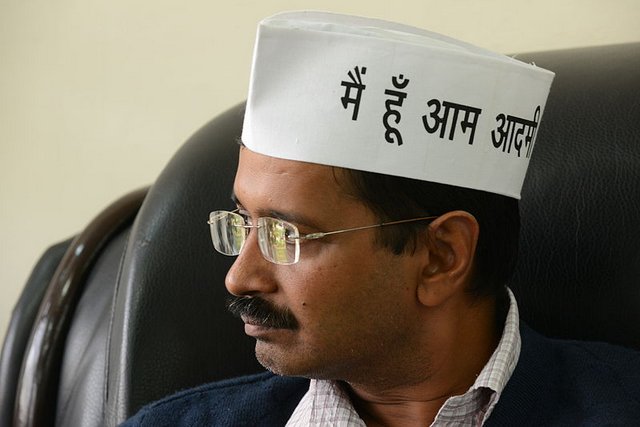 Arvind Kejriwal has been sworn in as chief minister in the Indian city of Delhi. Although he was an atheist in the past, he thanked the gods of four religions after winning the election.

On at least three separate occasions Arvind Kejriwal thanked the gods of Hinduism, Islam, Christianity, and Sikhism for the divine blessings bestowed upon him and his party, Times Of India reports. The specific deities invoked were the Supreme Father, Bhagwan, Ishwar, Allah, and Waheguru.

Zoroaster, Zeus, Ra, and Yahweh were not among the gods mentioned in the former atheist’s speech.

Arvind Kejriwal is the leader of an emerging anti-corruption party in India, the Aam Aadmi Party (AAP), or “Common Man’s party.” The symbol of the party is a broom. They promise a corruption-free Delhi with improved civic amenities. To denounce the culture of privilege that pervades Indian politics, Kejriwal arrived at the ceremony on a Delhi Metro train.

The AAP took 28 out of 70 seats and formed a coalition government with the support of the incumbent party, the Congress party. Bharatiya Janata Party (BJP) or “Indian People’s Party” won the most seats with 32, but did not form the government, and so will continue as opposition.

Arvind Kejriwal studied mechanical engineering at the Indian Institute of Technology Kharagpur, but later became a civil servant for the Indian Revenue Service. He founded a group called India Against Corruption that fought for tougher anti-corruption laws. He later launched the AAP party in 2012. The AAP channeled the energy of farmers, students, activists, urban youth, and women’s groups.

On his first day in office as Delhi Chief Minister, Arvind Kejriwal met with Delhi Police Commissioner BS Bassi and talked about ways of improving security in the city, especially for women. The security of women will be the law ministry’s top priority, he said, and it should take no longer than six months to try the accused.

In December last year, a 23-year-old woman was beaten and gang raped by six men on a private bus in Delhi. This event sparked massive demonstrations in the capital, which has the highest number of rape-reports among Indian cities.

Also in his first day, Kejriwal rearranged nine senior bureaucrats and reaffirmed his promise to provide 700 liters of daily water to every house in Delhi.

Matters India asked the former atheist what made him a believer again. His reply: “Yes, I was once an atheist. But look at our movement in the last three years. Is it possible to go from where we were to where we have reached today without divine support?” To fight poverty and corruption, the Delhi Chief Minister might just need the gods of four religions on his side.