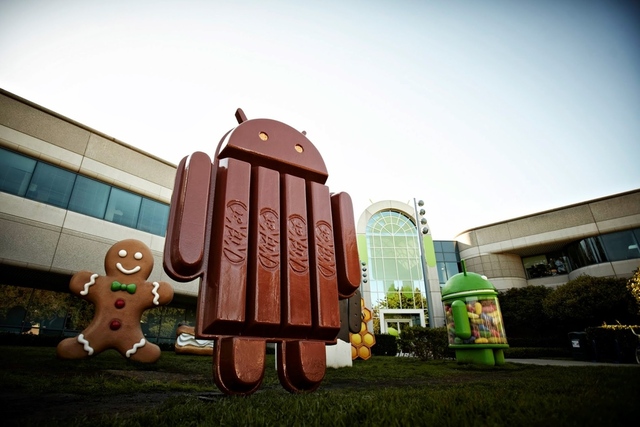 Google has released the newest version of their Android operating system, KitKat 4.4.1 for their Nexus 5 smartphone. The major OS update was released on October 31 for some devices, December 5 for a small number of Nexus devices, and December 6 for the powerful Nexus 5. Is it true that Google KitKat kills Apple Inc and iOS 7?

Google continues to focus on the user experience with latest Android release, using its experience and know-how to cram improvements into the familiar apps that users have come to love. Contacts are automatically organized by frequency of use, caller ID will search the web to identify unknown callers, and messages of all types are grouped together by sender.

The Cloud Print app allows Google users to send documents and images to any printer connected to the app, or to any printer with an app in the Google Play Store. Similar functionality allows access to files on Google Drive, allowing Quickoffice and other apps to quickly retrieve recently used files.

KitKat supports Bluetooth Message Access Profile (MAP), which allows Bluetooth-ready vehicles to communicate with devices running the operating system. Chromecast allows a device to broadcast video to TV screens, while Chrome Web increases the speed and accuracy of embedded web content. Devices equipped with an infrared blaster (IR) can now be used by Android as a remote control for TVs and other devices with an IR receptor.

Google also designed KitKat to optimize battery use on devices like the Nexus 5, allowing as much as 60 hours of music playback and battery-friendly step counting using a built-in pedometer with apps like the fitness-oriented Moves.

So will Google KitKat kill Apple Inc in terms of positioning the Android OS to dominate the mobile market?

Well, in terms of market adoption, Apple Inc is currently the hands-down winner, with iOS 7 running on more than 70 percent of Apple mobile devices, compared to only 1.1 percent of Android devices upgrading to KitKat.

Both Apple Inc and Google have streamlined their user interfaces with iOS 7 focusing on a minimalist approach that gets even novice users swiping away in no time. KitKat puts more emphasis on functionality, allowing users to personalize home screens with endless permutations of apps and widgets.

KitKat has the edge in customization, allowing Android users to use third-party apps for live wallpapers, virtual keyboards and interface manipulation. Apple Inc is not known for its openness to user modifications, and iOS 7 is not an exception to this rule.

KitKat and iOS 7 both have very powerful search functions with integrated search bars capable of scanning both the devices and the Web for content with ease. Google, of course, is the undisputed heavyweight champion in the arena of online searches.

Apple Inc redesigned their Notification Center, integrating with the Calendar app and allowing users to choose among myriad possible notifications. KitKat allows notifications to pop into running apps without forcing users to quit the app, meaning that text from Mom will come through without having to leave Candy Crush.

Both smartphones come pre-equipped with a suite of productivity apps, including calendars, clocks and notes. There are minor differences in the functioning of these apps, mostly reflecting the divergent design esthetics of Apple Inc and Google, but both systems will help keep users organized and on time. Of course, users have to actually use the apps to gain the benefits.

Google and Apple Inc have both included game solutions in their OS. KitKat manages games through an app called Play Games, while iOS 7 does the job through the Game Center. Both apps can track achievements, issue challenges and recommend games. Pretty much a draw in this category.

When it comes to user interface, Apple Inc has created a standout brand in the form of Siri, the voice-activated virtual secretary that allows hands-free operation of most the devices functions. KitKat answers Siri’s challenge with Google Now, replicating most of the vocal command functionality, with an additional predictive ability that attempts to answer probable questions before they are even asked.

After a rocky beginning with the Apple Maps app, Apple Inc has stepped up their game and provided a solid app in iOS 7. Google Maps has the advantage of familiarity and the strength of the familiar.

Both Google and Apple Inc provide serious gear for tech-junkies, and at this stage in development, it is more or less a matter of choice as to which device and operating system a consumer chooses. KitKat is a solid upgrade in the Android line, just as iOS 7 is a marked improvement over its predecessors. Of course, Google has upped the ante with the introduction of its Google Glass eyeware, which promises to be revolutionary. Don’t be surprised if Apple Inc debuts something along the same lines sometimes soon.

After all, if KitKat was designed by Google as an iPhone and iPad killer, it seems only fair that Apple Inc respond in kind and try to take a bite out of the market-space of Google’s confectionery-themed operating systems. With many Google Android device users are still running the Jellybean OS because the KitKat upgrade is not yet available for their hardware, Apple Inc may have a bit of breathing room to push out their next innovation. Are the analysts predicting a future where Google KitKat kills Apple Inc correct? The industry will have to wait and see.