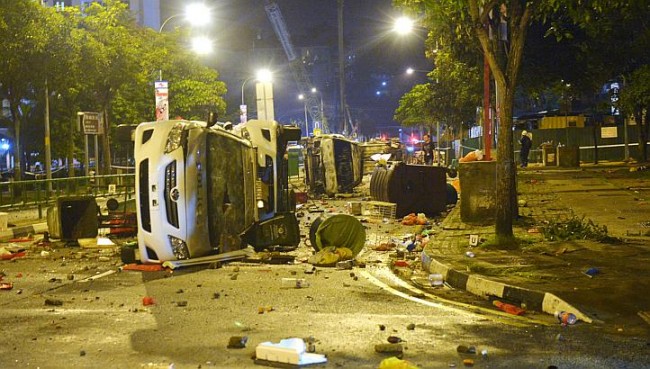 While the bus accident may have been the proximate cause of the Little India riot in Singapore, it is not unreasonable to speculate that disaffection among low-paid workers may have been a factor in the chaos that ensued. It seems rather obtuse to suggest that a riot of this magnitude was merely the result of a traffic accident and has no social context whatsoever; this is what government-owned Singapore media is reporting, however, as they attempt to whitewash the event and stifle any further discussion as to the real causes.

International media has been pointing out the fact that tension has been brewing due to the often difficult conditions migrant workers face in Singapore, and the bus incident was merely a catalyst which set things off.

Channel NewsAsia ran the headline: “No evidence foreign workers in riot unhappy with employers or govt.” The basis for this title was a quote by Law and Foreign Affairs Minister K. Shanmugam. Today Online has adapted this quote as a headline as well.

So the rioters were not unhappy with the their employers or the government. Well, that settles that. Or does it? It is more likely the case that no evidence was found because none was sought after–or it was ignored and suppressed.

Neither Today or Channel NewsAsia make any mention of the complaints many migrant workers have as to how they are treated in Singapore. Today approaches a real analysis in its “Voices” section, but skirts any actual mention of the problems while trumpeting Singapore’s successes:

Singapore has always prided itself on being clean, efficient and safe, and is well-known for its strict law enforcement.

Social and political stability, communal and ethnic harmony, high levels of public safety and security and low crime rates have been our “unique selling points” and have contributed to our global standing and consistent ranking as one of the best countries in the world to do business and live in.

The underlying problems which led to these incidents should be addressed. We must ensure our competitive advantages are not eroded. The Singapore brand name is at stake.

As part of the media whitewash, much of the coverage on Today and Channel NewsAsia centers on the prohibition of alcohol in Little India and the police’s hunt for the culprits.

Another article in the “Voices” section of Today argues that it is irresponsible to share videos of the riot on the internet, urging self-censorship of citizens.

Most Singaporeans are angry that police cars and an ambulance were overturned and burnt.

It is easy to share such graphic videos online. But let us press the pause button, and ask ourselves what our purpose would be in sharing a video, photo or tweet and whether we are aware of the outcome that would be achieved. What about unintended outcomes? Is there a hidden agenda to the information provided on social media and are we being manipulated?

Indeed, in a country without free expression or an independent press, social media, citizen journalism, and videos taken on phones are the only way for people to know what really happened.

Media in Singapore falls under heavy government control. Channel NewsAsia, Today, Straits Times, and other outlets are controlled by the state. Temasek Holdings is an investment company owned by the Government of Singapore, which covers just about every sector, including telecommunications. The state owns all seven local TV stations. The Ministry of Information, Communication and the Arts is a governmental body that regulates locally produced media, and decides whether media published abroad will be made available.

The Press Freedom Index by Reporters Without Borders put Singapore at an abysmal 149th place out of 179 countries ranked, the lowest of any developed economy. Singapore narrowly beats out Iraq and Burma, and comes behind impoverished nations such as Cambodia, Ethiopia, and Zimbabwe.

Singapore’s Media Development Authority is the censorship body that has the final say on any form of media produced or distributed in Singapore. For example, before one may perform a play, the script must be approved by the MDA.

Beginning on 1 June 2013, the MDA requires all websites that report on Singapore with “significant reach” to apply for annual licences. These sites must pay a fine of $50,000 Singapore dollars (about US$40,000) and remove objectionable content within 24 hours of receiving an order from the government. Most bloggers, of course, do not have access to these kinds of funds. The government of Singapore has been threatened by the “hacktivist” group Anonymous due to this restriction of free speech on the internet.

The government has effectively destroyed internet free speech in Singapore. It should come as no surprise that there is a media whitewash of the events of the Little India riot.

Videos of the Little India riot