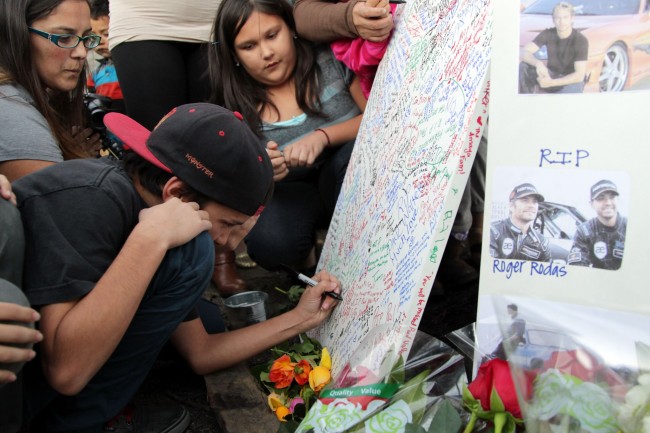 On Sunday an impromptu rally was held for 40 year old actor Paul Walker. Fans planned to drive out in their souped-up cars to acknowledge the passing of the star of the Fast & Furious movies. Unfortunately, whereas Walker takes his racing car out at night to race through the deserted streets in the movies, Sunday’s memorial saw thousands of car enthusiasts cause a horrible traffic jam that prevented anyone from picking up much speed.

Many mourners took their modified Corvettes and Porsches to a makeshift memorial shrine located near the location Walker died at on Nov. 30. Unfortunately, the Santa Clarita suburbs were in no way ready to handle that amount of traffic and the streets turned into parking lots.

If you were a fan of the Fast & Furious franchise but didn’t own a Porsche or a Corvette, not to worry. Many fans showed up in their regular, everyday Camry, Accord or Fusion. Reportedly, one Honda Accord had a rear window sign which proclaimed, “Race in Paradise Paul Walker.”

The rally was a true testament, not only to the fame and likeability of Walker, but also to the effectiveness of public media and the way that it is changing our society. Quickly officials began to expect more than 20,000 people to show up at the rally because word was spreading so fast on Facebook and Twitter.

Facebook and Twitter could not organize a better traffic pattern however. Many car enthusiasts waited in lines that stretched for miles away from the crash site. Walker was killed on Hercules St. a place where fans have placed bouquets of flowers and even left handwritten notes of condolence for their beloved icon.

Although traffic is usually a time to lose ones temper, especially in LA, Sunday’s tribute found fans putting away their anger for a more important cause. There was very little disturbance caused by the enormous traffic jam as traffic spread out from Hercules St. all the way to Interstate 5, a distance of more than a few miles.

Fans identify with Walker and the Fast & Furious franchise for many reasons, but the prevailing ideology surrounding the hype is a love of cars. One fan said he identified with Walker and came out to this site today because, “[Walker] had the same mantra we all live by.” He added that the lifestyle that is associated with fast cars is what associates these fans with Walker.

Perhaps the most moving scene on Sunday did not concern cars at all, but occurred at places where fans could walk up and write notes to their missed hero. Huge white walls were filled with hand written notes of love and condolence. Also, in a truly moving scene, fans scribbled little messages to their favorite actor on the burnt telephone pole that Walker’s car hit.

The police was on hand at this occasion, patrolling neatly every intersection and directing traffic towards the site. They were unable to do the near impossible task of keeping the lines moving however, as some fans resorted to parking their cars miles away and walking to the crash site.

It was not Fast & Furious, as thousands of cars and spectators took part in a memorial for the actor that caused a horrible traffic jam, but it was a very moving moment of car enthusiast and fans remembering their hero.