By Rebecca Savastio on December 4, 201316 Comments 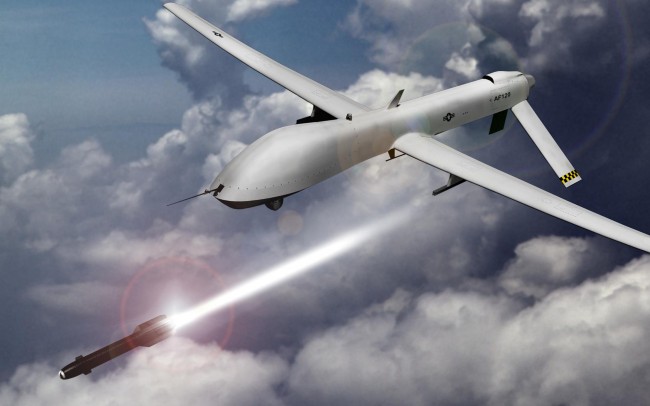 There’s a new Paul Walker conspiracy theory afoot. Was Paul Walker possibly killed by an Obama drone strike? That’s the stunning new question posed by not just one, but numerous “news” websites online. A website that calls itself Before It’s News claims that the so-called “Obama drone strike” was “caught on camera.” However, the video they show which is supposedly a “smoking gun” video looks as though it only captured a brief puff of smoke or a telephone pole that is very blurry and difficult to make out.

The theory of Paul Walker possibly being killed by an Obama drone strike goes something like this (see if you can follow along): The Obama administration wants to unleash a new program called “Fast and Furious” in which they take everyone’s guns. Obama concocted and carried out a plan to murder Walker with a drone. It was this drone that struck the car in which Walker and his friend Roger Rodas were riding in when they struck a tree.

The motive for this drone strike was so that the American public would “get used to” the words “Fast and Furious” and thus, accept the new gun confiscation program without resistance. Oh, and prior to that, there will be an “unprecedented” gun massacre and then eventually somehow the whole thing will lead into civil war.

The conspiracy theory began with a site called truther.org, a private blog that posed the question and outlined the possibilities yesterday. In the blog post, “journalist” David Chase Taylor, from Switzerland, puts forth the theory that President Obama has “admitted” to assassinating U.S. citizens with drones. Taylor goes on to say that the tree involved is the collision is “no match” for the car, citing the fact that the tree is small.

Taylor says the government is “subconsciously programming the public in a psychological manner” (mmm could the key word here be the “psycho?” in “psychological?”)

Taylor poses a question in his title, but he goes on to outright state that Walker was assassinated by a drone strike sent by the Obama administration. While Taylor points out that the tree is a “mere six inches” in width and would therefore not cause such extensive damage to the car; his critical thinking skills seem as though they could possibly be on the back burner; for what caused much of the damage to the car was the fire, which burned the car up into a mangled heap of metal. Moreover, hitting almost any sized adult tree at a high rate of speed can indeed cause severe damage to a vehicle. Paul Walker and Roger Rodas were the unfortunate victims of such a collision.

Taylor goes on to say in yet another blog post that U.S. agencies give out information to media outlets in order to cause more confusion and pull the wool over the public’s eyes. That is simply not true. What actually happens is that reporters sit with their coffee and ramen noodles pouring over sources to piece together a story. There are no “government agencies” involved in the process. If there were, the very next story that would be written would be titled something like “U.S. Government Tries to Strong Arm Journalists With Fake Information!” and it would be written by the very journalist the government tried to strong arm.

Was there a Paul Walker conspiracy? Was Paul Walker possibly killed by an Obama drone strike? Definitely not, but there’s a sale on tin foil going on at the dollar store if you think he was.