By Romana Outerbridge on December 1, 20133 Comments 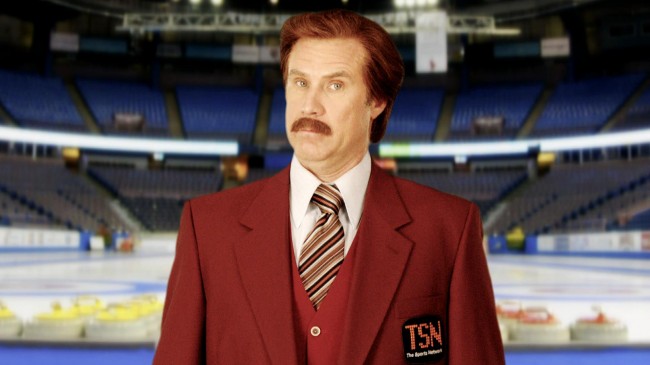 As Canadians all over the country prepare to watch their national sport, Will Ferrell also partakes in his own preparation to once again be Ron Burgundy. Ferrell was in Winnipeg, Manitoba on Sunday afternoon posing as a TSN sports anchor for the Canadian Curling Trials in the Roar of the Rings in his Ron Burgundy regalia in promotion for his film Anchorman 2.

In his usual entertaining fashion, Ferrell was quite the character. His important piece of information for viewers everywhere was that “Winnipeg was Latin for the small tundra bunny who lives in the hole on the hill.” (Just to be clear, that’s not true.) The Anchorman star donned a kilt at one point in a show of solidarity for what fans weren’t quite sure since he was in Canada not Scotland, but they remained ever still amused. The TSN opening draw, was to decide which of 16 teams would be able to represent Canada in the up coming Olympics.

This isn’t the first time Ferrell has used his character Ron Burgundy to host a show, and certainly doesn’t appear to be the last. The comedy legend has gone all over North America changing the way that movies are being marketed. Earlier he also anchored the North Dakota news cast as well causing fans everywhere to fall even more in love with the character. The comedy genius of Ferrell has also sent some marketing over-seas to Ireland as he offered his congratulations to Irish actor Jamie Dornan in his upcoming lead role in 50 Shades of Grey.

Each of the teams present was given quite the challenge in remaining focussed as Ferrell did his usual thing engaging the crowd. Many audience members described the experience as just plain weird seeing the mega-movie star step out of a limo into the slushy side-walks of Winnipeg dressed as Ron Burgundy. One of the highlights for viewers was Burgundy explaining the extent of his curling terminology knowledge. Apparently, he knows that “hurry hard” is an important term, but in his experience it’s most applicable in busy traffic situations. Using the telestrator, Burgundy drew a squiggly line around the stadium describing it as a “tougher shot” but he had seen it only accomplished “once ever in ’72.”

The lead up to the actual event was amped up by his commercials partnered with the all time Canadian favourite Tim Horton’s who were sponsoring the games. In the skit, Ferrell warns Winnipeg they are to “get ready to paint the town Burgundy.” After viewing the short commercial, it is physically impossible not to get exciting both about the movie, but even a little bit about curling as well.

For a nation that is mostly run by hockey fans, it’s may come as a surprise to find out how popular curling actually is. Curling hails most of its popularity in the prairies, including Manitoba where the trials were held. However with Farrell involved, it will be no doubt if the sport gets an injection of fans, including the comedic legend himself. It brought proud and joy to Canadians everywhere to have Ferrell open the Canadian Curling Trials as Ron Burgundy.