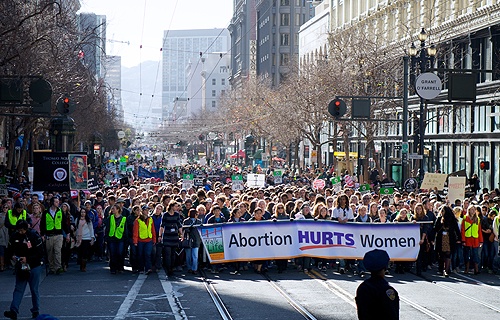 On Saturday January 25th thousands of anti-abortion protesters marched the streets of San Francisco for the 10th annual “Walk for Life West Coast”. The crowd started their march in front of City Hall and proceeded to Market Street where they ended at the Justin Herman Plaza. With posters in hand and yelling chants the protesters were calling for higher restrictions to be placed over the medical procedure for abortions and for the abolishment of abortions. Protesters chanted together “Pro-Life” while carrying such signs as “Women deserve better than abortion” and “Defend Life”.

The law allowing women to receive abortions was made legal over forty years ago. Along with San Francisco citizens thousands of protesters in Washington D.C. also rallied together to march in the annual “Walk for Life” this past Wednesday. This marked the anniversary of Roe vs. Wade, the Supreme Courts ruling that made abortions legal in 1973.

According to ABC News, San Francisco police officials did not have an exact head count for the rallied protesters, but it is said that the San Francisco protesters stretched out as long as a mile over Market Street.

Some of the protesters traveled over seventy miles to participate in this annual event and some were local citizens. ABC News reported that Nancy Castellanos, a high school senior, was one of those who traveled by bus with her church group of St. Peter’s Catholic Church in Dixon. While John Paine, 52, made the three and half hour drive with his church group that came from Visalia in California’s Central Valley. These two along with other anti-abortion protesters marched the streets of San Francisco to demonstrate their support for changing the laws concerning abortions. Both citizens expressed their beliefs as Castellanos explained to press associates that if a woman simply does not want to have the child there is always adoption.

Along with pro-life supporters there was also a small group of pro-choice supporters there with the crowd to counter protest. These protesters held signs that read “Abortion on demand and without apology.” Among them were many like Amy Wilson, a 20-year-old commercial artist, who expressed to press members that she participated in the walk a few years back. Since then she has changed her views concerning abortions and believes it should be the right of every woman to choice whether or not they get an abortion.

In recent years, anti-abortion groups have placed pressure on Republican states to take stronger actions towards abortion restriction legislation. Anti-abortion activists believe it should be hard to get an abortion. California possesses a Democratic governor and legislature, and USA Today reported that last year they revamped the law restrictions concerning abortions. They now allow physician’s assistants, nurse practitioners and certified midwives the license to perform different types of early abortions. For some California citizens this anti-abortion march on the streets of San Francisco signifies a stand for those citizens who do not believe abortions should have such loose restrictions.