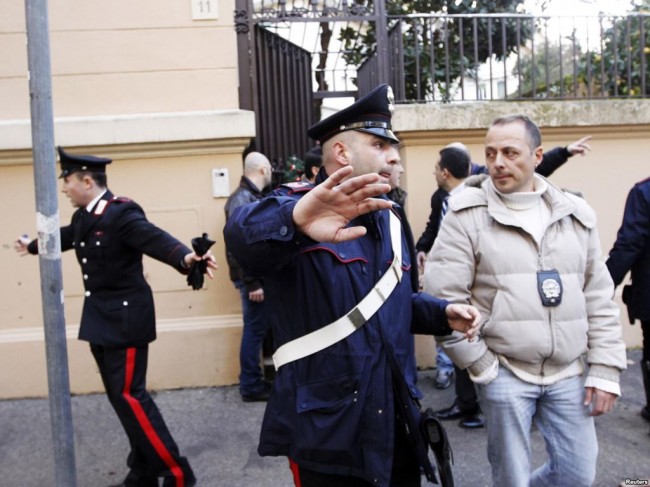 A bomb blasted in Rome near a French church early Friday and reportedly continued with two more explosions placed in St. Peter’s Square. The first bomb was detonated around 01:30 GMT and damaged three cars and a few windows in the surrounding region. The other two were said to blast at around 08:00 GMT, approximately one hour before the French President Francois Hollande paid a visit to Pope Francis.

A small homemade bomb exploded in Rome yesterday morning near Saint-Yves des Bretons, a French religious establishment located in the vicinity of historic Piazza Navona and reportedly continued with two more explosions. An anonymous call warned the Carabinieri that two more bombs were going to explode in St. Peter’s Square, but after the police searched the entire area, they reached the conclusion that the call was a hoax.

The Carabinieri spokesman told the reporters that they are not following any specific leads and that “nobody has claimed responsibility or given any warnings” with regard to the detonation of the first bomb. An official at the French embassy to the Vatican confirmed the version announced by the Carabinieri, but added that “one of the theories is that this act was linked to the visit by the president.”

The incident that occurred hours before the French president’s arrival at Vatican led the Carabinieri to strengthen security in the area and assure that the meeting between Hollande and Pope Francis would not be disturbed. The French embassy’s statement was connected to the second round of bombing, which was announced about one hour before the president’s meeting with the pontiff. It seems that the hoax was meant to discourage Hollande’s visit and boycott his decision to legalize abortion and gay marriages. A petition made by French Catholics that gathered about 115.000 signatures demanded Pope Francis to talk to Hollande about policies like surrogacy and legalizing assisted suicide.

Hollande’s first meeting with the pontiff at Vatican comes after the French president’s rumored affair with actress Julie Gayet and popularity at record lows. During the private meeting, discussions regarding the Syrian conflict were expected, but a statement issued by the Vatican announced that poverty and migration issues were also debated, especially in light of wars and people running away from less developed countries.

New Explanation for the Explosion Revealed

According to residents in the neighborhood where the bomb exploded, Hollande’s visit may not be the accurate explanation. They believe that the explosion could be linked to a nightclub found in the vicinity of the detonation which is rumored to have ties to the Mafia.

So far, none of the explanations have been confirmed but the investigation is ongoing. Homemade bombs are averagely frequent in Rome and yesterday’s explosion comes one week after alarms went off in three locations: at a fast food restaurant, in front of a bank’s branch and a court.

The bomb that blasted in Rome early Friday continued with the announcement of two more explosions, but the anonymous call which warned the Carabinieri proved to be a hoax. The explosion could be linked to French president’s meeting with Pope Francis amidst the former’s love affair with actress Julie Gayet and Hollande’s decisions with regard to legalize abortion, gay marriages, surrogacy and legalizing assisted suicide.