According to UN Climate Chief Christiana Figueres, Global Warming must be enhanced by Democracy since Communist China is “doing it right” in the fight against Climate Change. Figueres seems to be basing her opinion on the fact that Chinese political leaders are not constrained by things like congressional oversight and the will of the people. What Americans like to call Liberty and Freedom are evidently very detrimental to the fight against technological, social and societal progress, more commonly known as the Green Movement/Climate Change Hoax.

Figueres seems to be completely unaware that China beat the U.S. in total yearly Co2 production about six years ago, which says nothing of the real problem of record levels of air pollutants coming out of China. More importantly, Co2 is not a “dangerous gas” which harms the environment. In fact, a recent NASA study showed that Co2 in the upper atmosphere does far more to reflect heat away from the Earth, than it does to hold heat in; completely debunking the key argument of the Green Movement against the use of hydrocarbons as cheap fuel.

The primary thrust of people like Figueres seems to be a vast and detrimental curtailing of global economic viability: Underdeveloped nations are discouraged from seeking their own energy independence by drilling for oil or mining for coal. Meanwhile, well developed nations like America are continually chastised for seeking to harness the vast stores of natural resources available to them in their own lands. Complex and ever-growing taxation schemes – cleverly designed to centralize power and crush whole economies – are offered as the “only” solutions possible. Furthermore, scientists and knowledgeable citizens who might question the validity of the Climate Change gurus’ hue & cry, are immediately accused of collusion, stupidity and heresy against the Church of Global Warmists. 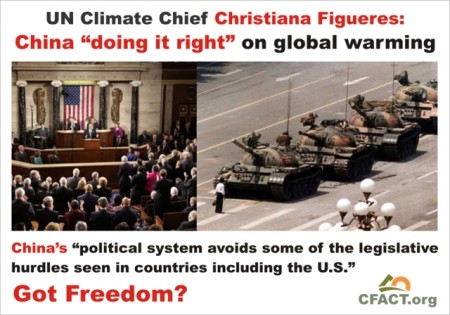 Democracy, Freedom and Liberty are said to enhance global warming, because those ideas are designed to free all people from the tyranny of centralized power. The entire Climate Change Hoax is a madly clever scheme to empower and enrich an Elitist Few, who know very well that changing Capitalist economies to Socialist economies – which is an absolute necessity for centralized Global authority – can only be accomplished if the perceived threat means virtually an end to life as it is currently known.

Figueres, and the people crafting the arguments, look at Communist China as a shining beacon of authoritarian domination by threat of military force. Rule by caveat and fiat are repugnant to a free people; especially those who live in Democratic Republics like the United States. Americans have a long list of Rights, enshrined within the Constitution and the Bill of Rights, granting the individual citizen protections, checks and balances against the Government.

Countries like China have no such protections for their citizens. The masses have no say, no prospects for personally improving their lot and no hopes for a brighter future, ever. That kind of political structure is what people like Figueres want for the whole world. Global Warming is just the latest, best effort of that particular ilk to achieve their lofty goals. War was tried a few times, but that tends to wake the sleeping giants and the Globalists repeatedly lose.

Democracy doesn’t so much enhance global warming, as it curtails efforts to centralize political power. So it should come as no surprise that a high ranking UN official says China is “doing it right.”