By Christopher Spencer on January 28, 20145 Comments 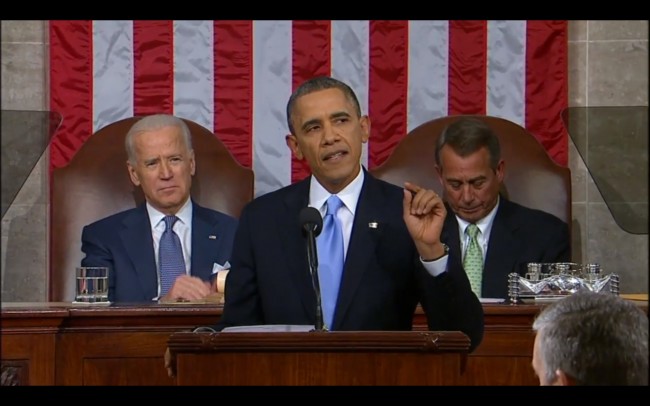 President Barack Obama gave his 2014 State of the Union speech tonight and as expected, the economy was the highlight of the evening. Obama did also speak on other domestic issues as well as ongoing military operations, but it was issues related to the economy that drove his speech. The address as a whole could be divided into three portions with the first dealing with the economy, then a shorter segment on other domestic initiatives, and concluding with a summary of military operations.

Many political observers expected the state of the economy to be the primary focus of Obama’s speech and this proved to be the case. Obama began by stating his assertion that economic opportunity needed to exist for everyone in America. “Opportunity is who we are,” he said. This translated into the goal of improving the situation of the middle class in the United States and creating more upward mobility to expand the middle class.

Obama had several specific proposals to address this issue. First he called for tax reform. He stated that the tax code for both citizens and businesses was too complicated and that by simplifying the tax code and removing loopholes, profits could be increased and businesses would have more incentive to invest in the U.S. This would in turn create more jobs and raise wages.

Obama’s second proposal involved renewed investment in infrastructure. He argued that the money saved by simplifying the tax code could then be invested in repairing and building bridges, roads, ports, and other key infrastructures. Obama claimed that a “first class” infrastructure was necessary to attract businesses and economic growth. It was on this note that Obama also indicated his willingness to use executive action when necessary to move his agenda. He stated that he would use his executive authority to streamline the bureaucratic process in approving infrastructure projects. This was just one highlight as President Obama gave his 2014 State of the Union speech.

This emphasis on executive action continued in another proposal where he called for an increase to the federal minimum wage. Obama noted that Congressional action would be necessary to formally change the federal minimum wage from the current $7.25 to $10.10, but he called on state legislatures to not wait for Congress and raise the rates in their individual states. He also said that he had issued an executive order requiring that all contracted federal workers be paid a minimum of $10.10. Obama stated that “No one working full time should have to raise a family in poverty.”

Finally Obama emphasized the role of technology in growing the economy. He called on Congress to undo the “sequestration” cuts from last year that scaled back government research grants. He noted that the U.S. is closer to energy independence than it ever has been, and he drew attention to the role natural gas extraction has played in that. He called natural gas the “bridge fuel” that could sustain the U.S. economy until “green energy” alternatives were available. In relation to this topic, Obama declared that “The debate is settled” and that “climate change is a fact.”

As Obama transitioned from the economy to other domestic topics, he drew attention to the state of the U.S. education system. He argued that access to education was key in creating future economic opportunities and renewed the call he made last year for Congress to establish universal pre-kindergarten nationwide. Obama also noted the increasing number of students with large amounts of college loan debt and made mention of his plan to “grade” colleges, issuing scorecards that would be determined in part by the amount of debt their students graduate with and their ability to find employment after graduation.

Obama then made brief comments on a series of other domestic issues. He called on Congress to pass comprehensive immigration reform before the end of 2014. He announced a new federal retirement proposal called “MyRA.” He then briefly commented on the positive aspects of the Affordable Care Act (ObamaCare) noting its popular provisions such as guaranteed coverage for pre-existing conditions and the ability of children to remain on their parent’s plans for a longer period of time. He concluded his remarks on domestic issues with brief comments on the Voting Rights Act and the recent episodes of gun related violence.

The final portion of Obama’s speech dealt with military operations and other defense issues. Obama noted that U.S. troops have been fully withdrawn from Iraq and would be fully withdrawn from Afghanistan shortly. He said this was not the end of anti-terrorism efforts, but that “American must move off a permanent war footing.” He called once again for the permanent closure of the Guantanamo Bay detention center, a goal that he stated before he even first took office in 2008. Obama also said that U.S. citizens must have confidence in government surveillance programs, and that efforts would continue to reform those programs.

Obama then commented on diplomatic efforts overseas. He expressed the hope that the people of Syria would be “free from dictatorship,” but did not call specifically for the removal of President Bashar Al-Assad. He declared that a state should exist for the Palestinian people but that a “Jewish State of Israel” must also exist and be secure. Finally he stated to Congress that they must allow negotiations with Iran to go forward, and that he would veto any renewed sanctions against that country so long as the diplomatic process was ongoing. He was clear however that the goal is to prevent Iran from obtaining a nuclear weapon and that if diplomacy failed, Obama would be the first to demand new sanctions and other actions if necessary.

Obama concluded his speech with the story of a wounded soldier and his road to recovery. He likened this soldier’s struggles with those of the U.S. as a whole. Obama said that even if the road is hard, America never gives up. It was on this note that he ended the speech. President Obama’s 2014 State of the Union speech highlighted the state of the economy and his proposals to improve the middle class in the coming year.