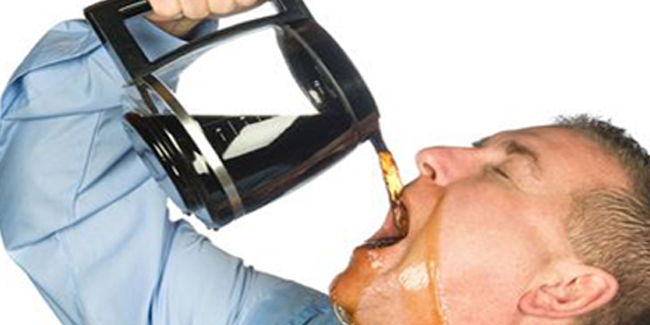 The most commonly used drug in the world is finally getting the study it deserves, and based on the amount in coffeehouse cups, there is a good chance many consumers are getting a dangerous dose. While it is beloved for benefits like increased energy, alertness, and sociability; intoxication on caffeine can totally kill that buzz with a slew of unsociable side effects like nervousness and gastrointestinal upset.

It is estimated that consumers average about 200 mg of per day, which is well within the 400 mg total the Food and Drug Administration (FDA) says is ok for healthy adults. However, If a typical medium coffee contains more than 300 mg, it is easy to see how individuals with a coffee habit may regularly become intoxicated with upwards of 1000 mg in their system. Though it may be hard to view a coffee buzz as drug abuse, an increasing number of clinical studies are outlining the recurrent health problems associated with continued use and intoxication. In lethal terms, the drug is estimated to be deadly at approximately 10 g, though half that amount can kill an adult with the right combination of stress, high-intensity exercise, or a physical condition.

In terms of drug safety, coffeehouse culture can hardly compare to the bar scene, yet some are pushing for similar government regulations and sales restrictions. In Denmark, France, and Norway sales restrictions on a major brand of energy drink have already been introduced, and in Canada the same product requires labeling. In Sweden, a regulation which limits the maximum quantity of over the counter caffeine tablets a customer can buy in a single purchase to 30 from 250 is credited with preventing suicides from overdose. However, due to the fact that the drug appears in such a wide variety of products including sodas, alcoholic drinks, and even bottled water in addition to naturally caffeinated beverages such as tea and coffee; regulatory initiatives are difficult to implement.

For a substance as widely consumed as coffee or tea, it can be easy to dismiss potential side effects from over use as symptoms of various other stressors. Researchers found that even when confronted with the negative effects it was having on their health, people who consume the drug excessively were not able to reduce their consumption.

Unfortunately for most consumers, studies show that while caffeinated beverages have been proven to curb fatigue for up to 6 hours, frequent consumption fails to enhance mental alertness and mental performance. A study of the effects of withdrawal on alertness and performance found that an increase in jitteriness after consumption of caffeine offset any increase in mental alertness or improvement in mental performance. This, combined with other side effects like insomnia, diarrhea, tachycardia, and muscle twitches make the world’s favorite drug seem less and less appealing.

As many reasons as there are to cut back the habit and avoid caffeine intoxication, a moment pondering the potential withdrawal symptoms is a total buzz kill before the quitting even begins. Recovering addicts can look forward to headache, fatigue, mood swings, depression, difficulty concentrating, and nausea among the list of potential symptoms. Although reducing consumption will never be easy, as more consumers become aware of the consequences there will likely be more support available for recovering addicts.