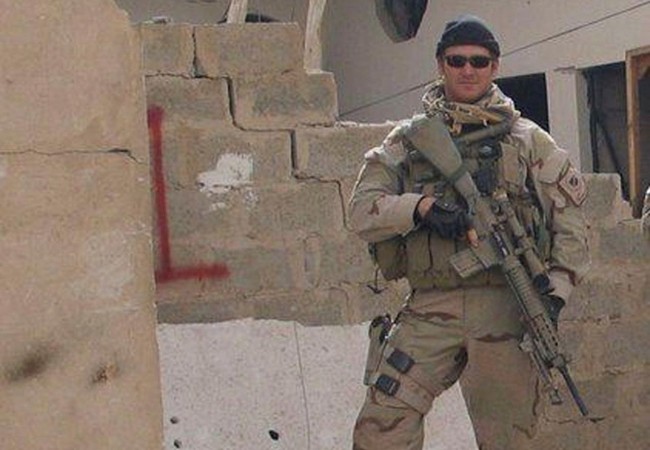 Chris Kyle would sit for hours on top of abandoned buildings in Iraq. Alone, except for his spotter, Kyle would provide what the military calls “overwatch” to his fellow troops. Protecting them against insurgents, Kyle was good at his job. Some would call him the best.

When Kyle retired from the US Navy and returned home to Texas, he brought his war demons with him. He brought back more. Kyle brought a desire to dig into his personal hurt and pain and bring comfort and healing to his brothers and sisters in arms.

That desire to help cost Kyle his life. In February 2013, Kyle was shot and killed by one of the very soldiers whom he was trying to help.

The Pentagon said that Kyle’s skills with a rifle were so fierce that Iraqi insurgents were terrorized by him. With 160 confirmed kills to his credit, the insurgents nicknamed him the “Devil of Ramadi” and put a bounty on his head.

A year after he was murdered, Kyle was honored by the Professional Bull Riders’ organization. At a rodeo in Texas, Jeff Robinson of Robinson Bucking Bulls displayed a fierce and unridden bull. Honoring Kyle, the bull was named The Devil of Ramadi.

Chris Kyle was born in Odessa, Texas. Raised as a cowboy in Midlothian just south of Fort Worth, Chris had always dreamed of serving their country and then returning home to raise cattle.

Chris, along with his brother Jeff, both served. Jeff was on active duty from 2000 to 2008 and Chris from 1999 to 2009. During Chris’ decade in the military, he proved himself to be an exceptional soldier and became, as one of his awards reads, the “…most lethal sniper in US military history.”

Eddie Ray Routh, 25, was also a veteran. Having served tours in Iraq and Haiti, Routh brought mental scars of his own home when he left the service.

Looking for help to exorcise the demons, Routh turned to Kyle for help. On February 2, 2013, Kyle and a friend who also worked with troubled vets, Chad Littlefield, took Routh with them to an exclusive shooting range in Glen Rose, Texas.

While the reasons for the shooting are still foggy, Routh shot and killed both men with a handgun before stealing the pickup and leaving the scene. Routh was captured a few hours later, south of Dallas. Charged with two counts of capital murder, Routh goes to trial in May 2014.

According to his friends, Chris Kyle had been familiar with the problems soldiers often face in returning to the civilian world. He devoted a large portion of his time to helping soldiers deal with the trauma of war.

In 2011, Kyle created the Fitco Cares Foundation to give veterans exercise equipment and counseling. He strongly felt that exercise, combined with the camaraderie of fellow vets, could help soldiers ease back into civilian life.

Kyle, who lived outside of Dallas with his wife and two children, had his own problems adjusting after life as a Navy SEAL. Deployed in Iraq during the most difficult years of the insurgency, he would spend hours alone on rooftops of bombed-out buildings with just his spotter and his .300 Winchester Magnum. Every day he would provide “overwatch” which meant it was his responsibility to keep the enemy from ambushing Marine units.

Kyle mentions in his book, American Sniper: The Autobiography of the Most Lethal Sniper in US Military History, that he did not think the job would be difficult. Two weeks into his tour in Iraq, his thoughts changed. A woman and child were standing beside a road in Iraq as several Marines approached. Kyle watched through his scope as she pulled a grenade from under her clothes. Kyle hesitated, he wrote, then shot.

As time went on, his hesitation stopped and he became excellent at his job. Credited with 160 kills, he once shot an Iraqi holding a rocket launcher 2,100 yards away.

Kyle’s autobiography was published in January 2012 and became a best seller. The success of his book turned Kyle into a celebrity of sorts and he appeared on numerous talk shows.

No one was more surprised by the book’s status as a best seller than was Kyle. His first book signing drew 1,200 people and about 850,000 copies have been sold.

Chris Kyle was honored during the opening coin toss at the 2014 Super Bowl. Legendary football great, Joe Namath took a moment to honor Kyle on the one-year anniversary of his death. The former New York Jets quarterback wore a bracelet with Kyle’s name and dates of service as he presided over the coin toss.