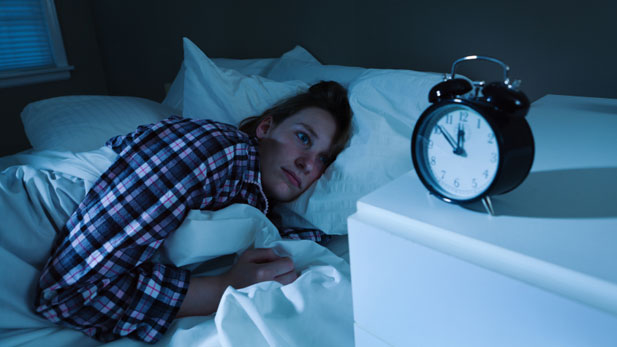 Insomniac brains work differently than those who can sleep well, according to a small study involving those 50 years of age and older.  A scant 28 people were involved in the study, but the findings suggest that insomniacs have physical reasons behind their inability to sleep well, if at all.

According to the US National Institutes of Health, 10 to 15 percent of adults report that they have chronic insomnia.  Dr. Rachel Salas of the Johns Hopkins University School of Medicine, along with her colleagues, wanted to determine how plastic or adaptable the brains of 18 insomniacs and 10 good sleepers were.  The research group used a technique called transcranial magnetic stimulation, a technique that has been Food and Drug Administration-approved for the treatment of depression and migraines, among other conditions, by disrupting the neural circuitry that creates the symptoms in the first place.

It was believed that, should an insomniac be given a task and have to adapt it for another context, the insomniac would struggle in accomplishing the task.  In fact, the opposite was true; it was the good sleeper who would have a hard time having to adapt.  In the study, Salas ran EEGs on the subjects and pulsed an area of the brain that would control the thumb muscle.  If, for instance, the subject’s thumb moved up and to the left when pulsed, Salas would ask the subject to move the thumb in the opposite direction when not.  Insomniacs had very little issue in adapting to the instruction while the good sleepers had a hard time trying to remember how to move the thumb or in what direction.

What became clear was that insomniac brains seemed to be more plastic or were more adaptable.  This seems to support other studies that have been done in the past which have indicated that those who struggle with sleep may be in a constant state of hyperarousal, where their brains are in a constant “on” state.  What is now questioned is whether chronic poor sleep has caused the hyperarousal or if insomniacs simply have more active brains.

Salas did note, however, that when insomniacs were given a more complex task, they struggled somewhat because they were a little more sluggish.  Her next study intends to work insomniacs through more complex tasks to see if they can adapt accordingly.  Salas says that the results of this current smaller study has offered some insight into the way the brain works in insomniacs and suggests that a follow up study may offer insomniacs some relief and some potential for sleep.

While the study makes it clear that insomniac brains do work differently, the big question as to why humans need sleep at all is still unanswered.  Salas, however, feels quite optimistic about the results of the study and believes there could be a way of discovering how to give insomniacs the chance they need to turn off the light switch in their brains for a few hours and finally get the sleep they need.   For now, however, it would seem that insomniacs everywhere will still have to keep burning the midnight oil.