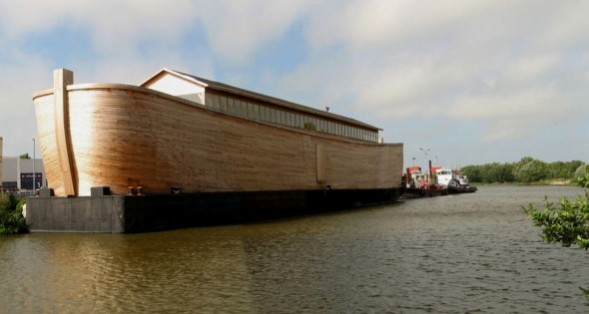 Australian Creationist Ken Ham is all over the press at the moment, given his upcoming debate with Bill Nye about the relative merits of evolution. Ham hopes that the debate will help to generate funds and publicity for his current project: a replica of Noah’s Ark built to the exact specifications outlined in Genesis. However, that project now faces a new challenge from the British Museum and a 4,000-year old cuneiform tablet from Iraq.

Dr Irving Finkel of the British Museum came into possession of the tablet in 2009, via an acquaintance whose father had obtained it while serving in the Middle East. According to Finkel, the tablet contains a Babylonian version of the story of the flood, including details of a survivor who built an ark to house all of the animals “two by two.” As in Genesis, the tablet confirms the exact shape and dimensions of this boat, with one major difference: it is a round, raft-life vessel rather than the traditional ark envisaged by many, including Ham.

The existence of a Babylonian flood myth has been widely known since the late 19th century, but existing Babylonian writings did not include any details of the vessel used to rescue the animals. For Finkel, the two key differences here are that the key phrase “two by two” is used, and that the size and shape of the boat are precisely defined.

The issue has already been addressed by Answers In Genesis, the organization run by Ken Ham and behind the project to build the replica ark. AIG flatly reject the idea that their project is in anyway threatened by this alternative vision of a round ark, then turn the tables on Finkel by claiming that the Iraq tablet was most likely created after the Book of Genesis was written. The group also argues that the flood was part of Jewish belief before the Jewish people were exiled to Babylon in the sixth century, which is when Finkel believes that the story became integrated into their beliefs.

The group have reaffirmed their commitment to the project, which is expected to open at the Creation Museum in Kentucky some time in 2016. The group are currently seeking to raise around $25 million in funding to complete the project, which they hope will help to promote a vision of world history in which the Book of Genesis is literally true,

If completed, the Ark would become a major attraction at the museum, which currently sees some 250,000 visitors per year. The museum also cost $25 million to build, with Ham and his organization successfully raising the money through a private funding drive. The museum opened in 2007.

The Biblical literalism of Ken Ham and his organization continue to put him in conflict with the scientific and archaeological communities. That’s why Bill Nye has accepted the invitation to go to Kentucky and discuss the ideas which have, according to The Science Guy, threatened America’s position as a leader in science. The winner of the controversial debate remains to be seen, although the publicity is sure to provide a boost to the Noah’s Ark plan, regardless of anything that’s said by Nye or tablets found in Iraq.