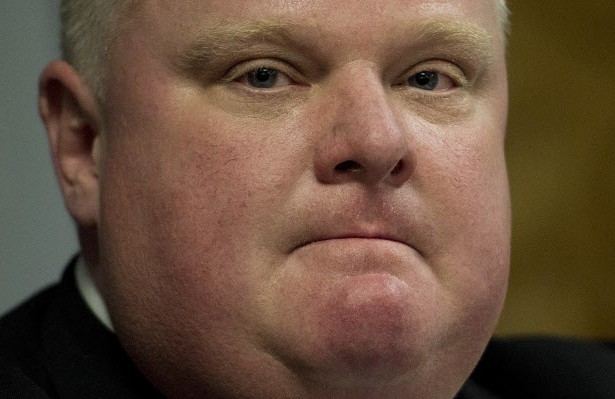 Rob Ford has been trying out his Jamaican accent in a drunken rant in a fast food joint. The troubled Mayor of Toronto, is the second most famous Canadian to be in trouble for substance abuse this week. He even managed a run in with the police, but this time it was just for jaywalking.

The Mayor of Toronto was in Vancouver on Canada’s West Coast, and was apparently quite drunk when he was filmed in a fast food restaurant referring to one of his opponents as a “Bumbaclot” in a Jamaican accent. Bumbaclot being Jamaican patois for a rag you wipe your behind with.

In a garbled and incoherent rant Ford complains about the unidentified foe. In the video he appears to be most upset about some financial implication of some incident, and repeats the slur. When a server in the restaurant says Ford should be there alongside Prime Minister Harper, Ford says no, but does continue to claim that he’s a “straight up guy.” He gives examples of occasions when he has been there for people, but they are hard to decipher through his slurring.

Ford was in Vancouver for the funeral of his close and friend and aide, David Price’s mother. After the funeral Ford and Price went out on town and were both ticketed for jaywalking. Although Vancouver police have a reputation for being fast with the jaywalking tickets, regularly netting both clubbers late at night, and shoppers on Saturday mornings, this will be least of Ford’s problems. At this point it is not clear whether Rob Ford answered the officer with a Jamaican accent, or subjected him to a drunken rant.

The Mayor, who is on record admitting to buying crack cocaine in a drunken stupor has recently faced even more heinous allegations. The former spouse of Rob Ford’s sister Kathy, Scott MacIntyre, alleges that Ford conspired to have him beaten whilst in police custody, in retaliation for, or to intimidate him against, speaking up about Ford’s drunk activities. He is seeking $1 million in damages.

Although MacIntyre’s lawyer argues the issue should be investigated, Toronto police say they will not unless a formal complaint is made to them. Ford has 30 days to lodge a defence in the case.

Even Rob Ford’s wife is alleged to have spoken out about the Mayor’s substance abuse. Claims made in a book by Toronto Star reporter, Robyn Doolittle, quote Renata Ford as having discussed both pills and “blow” with the Mayor, who said he would stop the pills but not the blow. However, Renata has already come out and denied the allegations. She however, was part of an investigation when Rob Ford was accused of assault and making death threats against her. The charges in that case were later dropped.

The Toronto mayor, who has been stripped of most of his most meaningful powers, and in November was ordered removed from office by a judge, continues to fight on. He won an appeal against the judge’s ruling, and despite comments about what he likes to “eat at home,” remains a popular figure within at least part of the electorate in the greater Toronto area. Indeed, even after getting his ticket, Rob Ford was out partying at nightclubs where fellow revelers flocked to take cell phone pictures with him. Hopefully there will be no more drunken rants in a Jamaican accent from Rob Ford.