From a smart phone app to a diet drug, some surprising and noteworthy innovations in smoking cessation may offer much-needed assistance to those struggling to quit. One of the leading preventable causes of cancer death, smoking proves to be one of the most challenging addictions to overcome despite an individual’s awareness of how detrimental it is to their health. Could the answer lie in innovative new solutions which are more easily adaptable to modern lifestyles?

Over the years, a number of smoking cessation assistance programs have achieved notable success, one of which has been attending a support group. With the increase of virtual connectedness through social media and smart phones could a virtual means of accountability in addiction recovery be more readily accepted and sought-out by smokers? A recent study done by the Sydney Medical School might have the answer. 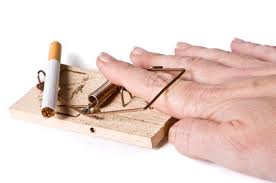 The uptake (downloads and usage) of a smoking cessation app were measured and compared over one year across three countries; Australia, the United Kingdom, and the United States. The study found that the app was able to reach smokers who were ready to quit within the next 30 days but were not seeking professional help. The demographic was similar across all three countries, with the respondents all being relatively young and already using other health related apps.

According to the study, these internet-based smoking cessation assistance programs get their noteworthy advantage from anonymous group support, such as discussion boards, email, and other virtual innovations which allow the consumer to discuss sensitive issues more comfortably than they can face-to-face. Another digital innovation to help smokers quit comes from Chrono Therapeutics, a pioneer in digital drug products.

Smartstop is the first fusion of nicotine replacement therapy (NRT) and individualized behavioral support. The wearable transdermal nicotine delivery system synchronizes with a smoker’s cravings to deliver the right amount of nicotine, connects to bluetooth enabled devices, and provides digital behavior support. Though Smartstop is not yet on the market, it is going into its final clinical trial and we could see it on the market as early as next year.

Smokers looking for more immediate drug assistance in smoking cessation have several available options, which may soon include the Belviq weight loss drug. Belviq works by stimulating serotonin, a neurotransmitter with many functions, including control of mood and appetite. The drug is intended to make a patient feel full and take away cravings, and its creators are hoping it can have a similar effect on a smoker’s craving for nicotine. Phase 2 trials of Belviq for smoking cessation are planned in the first half of this year, though the drug is already available for weight loss with nearly 4,900 prescriptions.

Lastly, though it is hardly new, the electronic cigarette is still a noteworthy innovation which should be mentioned when discussing smoking cessation assistance from a modern perspective. E-cigarettes offer many benefits for smokers who want to quit but are not ready to drop the habit entirely. Enthusiasts praise the device as a safer alternative to regular cigarettes, and many claim e-cigaretts have helped them kick the habit entirely. However, since the electronic cigarette has not yet gone through the required federal approval process their makers are still unable to market them as a smoking cessation device, leaving their effectiveness up to consumers to determine.

One Response to "Smoking Cessation Assistance From Noteworthy Innovations"