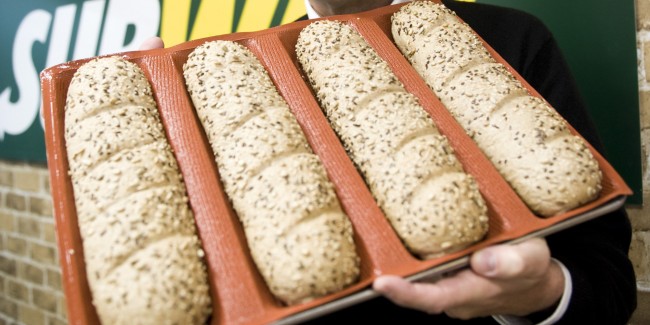 Subway, the world’s largest sandwich chain, is receiving a lot of attention in the media these days after announcing it plans to remove a chemical from its sandwich bread ingredients. The chemical, Azodicarbonamide, is legal in the U.S. and probably in a lot of other products consumed, so is the criticism Subway is receiving unfair? Should it be pointed at the FDA?

Azodicarbonamide is used as a dough conditioner by many fast food and restaurant chains. Look on McDonald’s Web site; their buns contain Azodicarbonamide. The same is true for a significant amount of the bread products sold in the U.S. Look at a package of Oroweat bread, Van de Kamp’s hamburger buns and others. There is Azodicarbonamide listed in the ingredients.

This raises the bigger question of why Azodicarbonamide is used in the United States and Canada but not in other countries. Azodiacarbonamide is an ingredient approved by the U.S. Department of Agriculture and the Food and Drug Administration in their statement. The FDA list Azodiacarbonamide as safe for use as “dough conditioner,” provided it does not exceed quantities of 45 parts per million. However, the World Health Organization has linked the chemical to respiratory issues, such as asthma. Azodiacarbonamide has been banned in Europe and Australia. It is not used in their bread products, even in Subway restaurants.

The battle over Azodicarbonamide is just one of similar arguments taking place in the country over other food additives and their safety. The FDA defines a food additive as any substance the intended use of which results its becoming a component of or affecting the characteristics of any food. The organization requires premarket approval for any ingredient not on their list. Azodicarbonamide is on their Web site’s Food Additive Status List as approved for use in flour for breads and cereal.

The FDA Web cite offers the following criteria used in evaluating whether an additive should be approved: 1) the substance composition and properties, 2) the amount that would used, 3) any health effects, whether immediate or long-term, and 4) various other factors. They set a safe level of an additive evaluation well below levels where an adverse effect might be expected.

Under pressure from consumer groups, Kraft is changing its Mac and Cheese recipe to eliminate the artificial yellow dye it was using. They’ve already made this change in other countries. General Mills is removing a genetically modified ingredient from Cheerios and other companies are being targeted for chemicals they are using.

If there are questions of food safety, why use an ingredient that is not needed? Other breads, as noted above, including Subway’s other countries, do not use Azodicarbonamide. Kraft was not using the yellow dye elsewhere. There needs to be a broader discussion on why unnecessary chemicals are approved by the FDA for use in the United States. Rather than specifically targeting Subway, when McDonalds and Burger King could also be targets, it might be interesting to find out why the FDA does allow Azodicarbonamide when others do not.