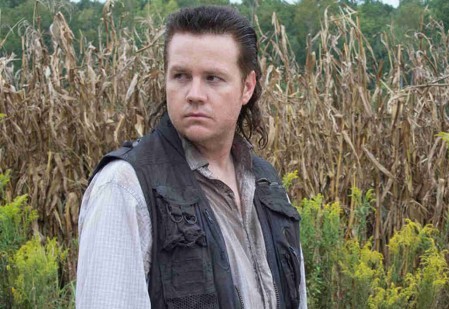 Episode 11 of season 4 of The Walking Dead: Claimed was a mixture of crazy cheese bonding and Rick at rest. This episode gave insights to three separate stories. Carl and Michonne started off lightheartedly and after an awkward moment, Michonne decides to go searching for provisions with Carl and she talks the still recuperating Rick into staying behind and resting up. In this episode, Michonne is shown to have a lighter side which continues to shows an even greater depth to this “kick-ass” character. While these two friends forage for supplies the audience learn more about the samurai sword expert.

In this show Michonne is a more relaxed character who is not afraid to pull out all stops to get a laugh out of her scavenging companion, using crazy cheese to do a walker impression. When this fails to get a reaction out of Carl, she apologizes saying she’s not very good at making someone Carl’s age laugh. She feels comfortable enough to add, “Toddler’s think I’m funny.” This allusion to her late child, as a sort of throwaway comment shows just how far this formerly stoic and taciturn walker-hunter has come. Aside from her promise to Rick that she will be taking no “further breaks” and insisting that he take another day of rest, Michonne appears to be more at ease with herself and her past. The storyline following her and Carl is easily the most heart warming segment in the show.

While Michonne and Carl, with their crazy cheese bonding in The Walking Dead: Claimed is touching, revealing, and encouraging, Rick’s day of rest is more comedic in nature. Rick’s day is a mix of suspense, unarmed panic and a desperate fight to the death with one of the redneck intruders who disturb his nap. When he is awakened by the sound of visitors who sound as though they could be as dangerous as the walkers, Rick immediately reaches for the gun that he gave Carl. Another moment of amusement earlier in the episode; Rick’s son takes the hand cannon, which is almost as big as he is, and tucks it in his belt. Later, when exploring another house, he takes the gun out and holds it one-handed; never mind that if he had to shoot the oversized weapon the recoil could yank his arm out of its socket.

Rick, has to hide under the bed while the redneck horde squabble, fight and, in one instance, leave one member dead. Rick’s quiet panic and attempts to go unspotted, while looking for a weapon were brilliant. While not quite belly laugh material, the danger Rick is in balances nicely with the comedic feel to this otherwise threatening situation. Meanwhile, Michonne makes a shocking, and tragic, discovery and both she and Carl discuss the Judith situation which resulted in that earlier awkward moment and they continue strengthening the bond between them. Rick lies under the sagging bed while its occupant snores.

Another intruder comes up stairs and disposes of the sleeper who sees Rick under the bed as he gasps his last breath. Rick watches, head cocked to see what the outcome will be. Once the new intruder takes over the bed, the action goes over to Glenn and Tara who are travelling with the trio they met at the end of last week’s episode. Glenn, gets the truck stopped and starts off to find Maggie. After a brief fight, Sgt Abraham Ford introduces his companions to the two survivors; Rosita Espinosa and Doctor Eugene Porter. Ford explains that Eugene is a scientist and he needs to reach Washington because he knows what caused the walker outbreak.

This segment was also amusing. Espinosa, who is dressed like a real-live Lara Croft from Tomb Raider steps in to help Tara break up a fight between Glenn and Abraham, Eugene sees a group of walkers and opens fire. In his shooting spree, Porter “kills” the Army truck they were all riding in. This week’s show was a great mix of chuckles and white knuckle moments. The newcomers are interesting, yet, mysterious in their “classified” mission to Washington. By the end of the episode, both groups are on their way – Rick and his two companions and Glenn, Tara and co – and it seems that at least one road leads to Terminus as Rick, Michonne and Carl find themselves on a railroad track and see the sign promising sanctuary.

The Walking Dead: Claimed finished with Rick and co heading toward Terminus after another crazy cheese bonding moment, this time Carl was the instigator of “cheesy humor” and Rick’s day of rest, which really wasn’t, seems to have lifted his spirits. Granted, they may have been buoyed earlier in the program when he heard his son laugh for “the first time in a long time.” The father and son really needed Michonne who has also benefited from joining up with the, smaller family Grimes. The new trio who have joined up with Glenn and Tara will hopefully have their backstory revealed on later episodes and the show does end on a path, or train track, that just might reunite Rick and Carl with Judith.

One Response to "The Walking Dead: Claimed Crazy Cheese Bonding and Rick at Rest"