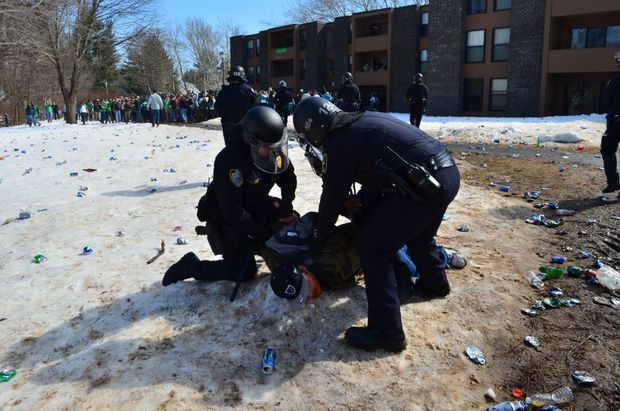 The Blarney Blowout, a pre-St.Patrick’s Day celebration near the University of Massachusetts Amherst campus, resulted in a fiasco that led to more than 70 student arrests on Saturday. Thousands of students who were gathered in drunken and rebellious mass, encouraged the participation of police in riot gear to join the days riotous events.

The event, which began around 10 a.m on February 8, gathered party-goers who came out in a pre-St. Patrick’s Day celebration to kickstart their spring break festivities. In the days leading up to the event, emails had been sent out to all students warning them that the Blarney Blowout was not a school sanctioned event. The yearly event, while not held on campus, is sponsored by local bars throughout Amherst and draws many students to it. With a reputation of getting out of hand, just last year, several people who participated in the Blowout were hospitalized and six were arrested for their illegal and violent acts which included smashing windows, setting fires, and hurling bottles at the crowd.

As a college event, the Blarney Blowout encourages students to become highly intoxicated in a bout of daylong partying that is known to become unruly. Attracting masses by the thousands, the Blowout has given UMass rightful cause for concern as it has led to violence, fights between party-goes, sexual assault, property damage, and violent aggression toward police and community members.

UMass’s Interim Vice Chanellor Enku Gelaye delivered a statement on Monday, saying that while most students are respectful of neighbors and are typically non-disruptive, those students who are not will surely be reminded of, “the seriousness with which the university takes these matters.” She had indicated that there was going to be a much more significant presence of campus and town police than in previous years, with the intention to address anything that seems potentially threatening and act definitively, making arrests if necessary. The police, who showed up as a precautionary measure, were dressed in full riot gear on Saturday and spent most of their time trying to disperse concentrations of large gatherings around the campus.

This year’s Blarney Blowout was perhaps one of the most dangerous and disruptive, resulting in more than a few student arrests. What started off as series of lawn parties on Saturday, quickly escalated into aggressive behavior towards the law enforcement officers. The officers had been hit with cans and bottles that were thrown into the crowd with several officers sustaining injuries. Although none of the officers were hospitalized, one had sustained a deep cut from one of the glass bottles that was hurled his way.

Most of the 73 people who were arrested were males who had failed to comply with police demands, ordering them to disperse. Amherst Police Captain Jennifer Gunderson reported that the Blarney Blowout displayed some of worst scenes of drunkenness and unruliness that police have ever seen, and continued on to emphasize how dangerous the event can be, characterizing the massive affair as promoting destruction of property and violent behavior.

With ambulances busy responding to calls about excessive drunkenness and violence, most of the individuals who sustained injuries related to alcohol or fighting were taken to the Cooley Dickinson Hospital in Northampton.

A spokeswoman for UMass said that the university denounced the event and those students whose participation in the Blarney Blowout resulted in arrest will be in violation of the school’s code of conduct and may be subject to suspension or expulsion.