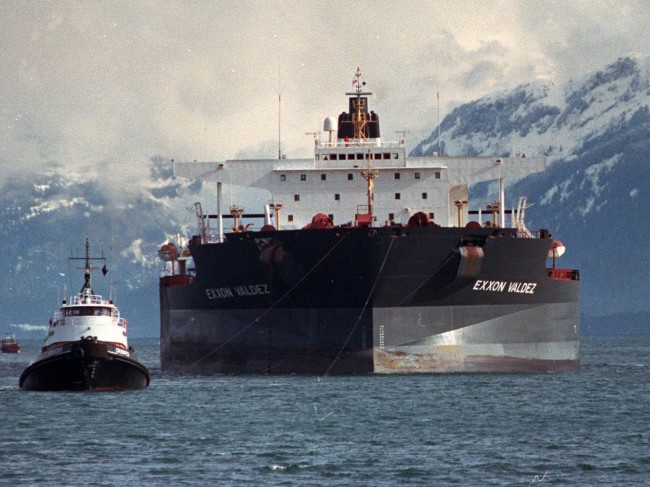 25 years ago today Alaskans and the rest of the world awoke to the news that the Exxon Valdez oil tanker was aground on Bligh Reef, gushing oil from eight ruptured cargo tanks. Eventually 11 million gallons of oil poured into Alaska’s Prince William Sound, coating 1,300 miles of coastline with gooey, sticky, tarlike black crude. The spill was the largest in U.S. history at the time.

The Exxon Valdez was the second newest ship in the Exxon Shipping Company fleet. 987 feet long, the tanker carried more than 53 million gallons of North Slope crude that had arrived at the Valdez oil terminal via the Alaska Pipeline. The oil was en route to Long Beach, California.

Captain Joseph Hazelwood has been a central figure in the Exxon Valdez spill investigation, as has Third Mate Gregory Cousins. National Transportation Safety Board (NTSB) testimonies detailed how Hazelwood spent the Exxon Valdez’s departure day, May 23, 1989, on ship business, shopping, and drinking alcoholic beverages in Valdez bars with other ship officers. Later the cab driver and gate security guard testified that no one in the party appeared to be intoxicated.

When the group returned to the ship at about 8:25 p.m. they found that the originally scheduled sailing time of 10:00 p.m. had been moved up to 9:00 p.m.. When the ship departed at 9:12 p.m., it was under the direction of marine pilot William Murphy, one of the group who had been drinking with Hazelwood that evening. Marine pilots navigated the tanker out of the harbor and then return to Valdez.

According to usual procedures, the tanker was accompanied by tug through the Valdez Narrows. Hazelwood was not on the bridge during the passage through the Narrows, and was called to the bridge about two hours later when Murphy left the ship to return to Valdez. Hazelwood was at that time the only officer on the bridge, and there was no lookout posted, even though one was required.

In order to avoid floating ice, the ship was diverted from the outbound sea-lane into the inbound lane. The tanker speed was increased to full speed ahead, and, after instructing Cousins about when and where to return to the outbound lane, Hazelwood left the bridge just before midnight. Cousins was schedule to be relieved by this time, as he had completed a six-hour shift, but he knew his replacement had worked long hours during the loading process, and told him not to hurry to relieve him.

Although company policy requires more than one officer on the bridge, Cousins was alone. His work hours that day were determined to be a contributing factor to the accident, as were crew fatigue and staffing limits on the tanker. Tankers in the 1950s carried crews of about 40 and transported about 6 million gallons of oil. Exxon tankers are certified by the Coast Guard for a minimum crew of 15, for which they have received criticism for the overtime required to justify the reduced level of personnel.

The timing of events that occurred on the bridge after Hazelwood retired to his cabin are still unclear, but investigations have shown that Cousins plotted the course to return the Exxon Valdez to the outbound lanes in the very early morning of March 24. However, it appears that the location of the tanker had been miscalculated, as about that same time the lookout spotted the light on Bligh Reef off the right side of the ship, instead of on the port side where it should have been.

The tanker was accelerating, out of its lane, and on the wrong course. Cousins took the ship off autopilot and ordered a course change. He also contacted Hazelwood and let him know they were returning to their traffic lanes. The ship did not turn fast enough. Realizing this, Cousins contacted Hazelwood again to report the danger and at the end of the conversation the first impact with Bligh Reef occurred. The Exxon Valdez had come to a stop with the center of the ship sitting on Bligh Reef. Eight cargo tanks out of 11 were ruptured.

Hazelwood rushed back to the bridge, and attempted to try to navigate off the reef without success. Even after being informed of the damage to the cargo tanks Hazelwood continued to try to get the ship off the reef. His efforts continued even after the chief mate advised him that the ship was no longer stable.

In the first 3 hours and 15 minutes after the crash 5.8 million gallons spilled from the Exxon Valdez. Spill response capabilities of the Alyeska Pipeline Service Company, operators of the oil terminal, were slow and inadequate. Exxon Corp. mobilized huge quantities of personnel and equipment to the site, but the first critical hours of containment efforts were lost.

The oil spread through the waters of Prince William Sound and onto the coast line, where crews consisting of 10,000 workers, 1,000 boats and 100 planes and helicopters spent over four summers trying to clean the beaches. However, it is believed that the action of the sea during winter storms probably accomplished more cleanup than the crews were able to with the high pressure hoses and chemical solvents.

No one knows exactly how many animals and birds died in the spill. Bodies of more than 1,000 sea otters and over 35,000 birds were found, but this is considered to be only a small part of the actual casualties, since most carcasses sink. Estimates are billions of salmon and herring eggs, 22 killer whales, 250 bald eagles, 300 harbor seals, 2,800 sea otters, and 250,000 seabirds.

Oil still remains in some areas, and in some places is nearly as toxic as it was at the time of the spill. Oil still lingers over 450 miles away, on the Katmai coast and Kenai Peninsula. Environmental damage has continued for years.

Long-lasting components of the oil have caused chronic damage to fish hearts because of oil contaminating their eggs. Other sea animals after continued to suffer from oil deposits in sediment and under rocks that contaminate clams and other food sources.

In 1990, Congress passed the Oil Pollution Act that requires the Coast Guard to strengthen regulations on oil tank owners, operators and vessels. Tanker hulls today prove better protection from spills resulting from a comparable incident, and communications between vessel traffic centers and ship captains have improved.

Scientists continue to look for the component in oil that is toxic to fish. Studies are still ongoing about the long-term success of various methods of lessening the impact of the remaining oil. The next update is due in October, more than 25 years after the Exxon Valdez spill.