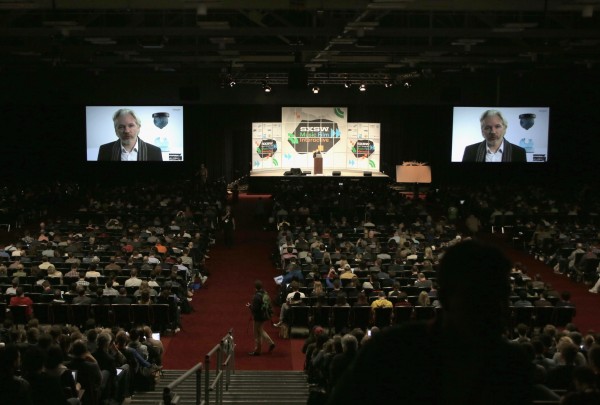 Wikileaks founder Julian Assange spoke to an audience of 3,500 at the South by Southwest Interactive Festival in Austin, TX on Saturday. and besides hinting that he could be leaking more information in the near future, he blasted President Obama and the NSA, calling it a “rogue agency.” Assange, who has been confined to the Ecuadorean embassy in London since 2012, spoke to the audience over Skype and touched on government surveillance and national security reporters.

Assange attacked the president for not taking the information that NSA whistleblower, Edward Snowden, leaked seriously and asked, “Who really wears the pants in the administration?” He said that normally when injustice is exposed, someone gets fired or is forced to resign. If necessary, there is an investigation and prosecution, but none of this has happened since the NSA surveillance information has leaked, leading Assange to believe the administration is not serious about reigning in the “rogue agency.”

Though Assange said that the NSA had co-opted the Internet over the last few years, forming a military occupation of a civilian space, and has not slowed down its widespread surveillance, he argued that now that the NSA’s practices are under the spotlight, with criticism both in the U.S. and abroad, there must be change coming.

Unfortunately, those who are strongest in their criticism of the government have had to flee from prosecution. As Assange has taken asylum in the Ecuadorean embassy, Snowden has similarly fled to Russia, where he lives in exile. Along with four other critics he spoke of, Glenn Greenwald, Sarah Harrison, Laura Poitras, and Jacob Appelbaum, who also live outside of the U.S., Assange said there is a new kind of political refugee, where their personal freedom is diminished.

In Assange’s particular situation, he has taken asylum in the Ecuadorean embassy to dodge an arrest warrant and extradition to Sweden over allegations of sexual assault made against him. From Sweden he believes he would then be moved to the U.S. to face charges for publishing hundreds of thousands of classified government documents. He compares his situation to living in prison but with a more lenient visitor policy. But living in an embassy also provides Assange a freedom not granted to many other political critics, especially those on the run. Because he is inside the embassy, beyond the reach of the British police, and has access to the Internet and cannot be silenced, Assange can still essentially operate as he would on the outside. “To some degree, it is every national security reporter’s dream,” he said. “To be in a land without police.

The hour-long appearance by Assange at the festival suffered from multiple technical glitches. The audio cut in and out and at one point, the event’s interviewer, Benjamin Palmer, who is the co-founder of marketing company The Barbarian Group, began to text Assange the questions. Assange joked that the technical difficulties was a result of attacking the NSA, the “rogue agency” perhaps striking back by interfering with the signal. There may be something to that if the same glitches occur for Snowden, who is scheduled to speak at the festival on Monday.

One Response to "Julian Assange Calls NSA a ‘Rogue Agency’"