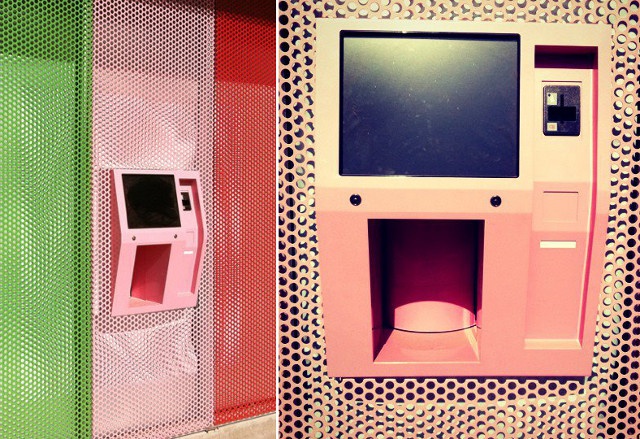 New York City is the newest home to the latest innovation in desserts–a 24-hour cupcake ATM. In the city that never sleeps, sweet-toothed patrons will be able to satisfy their cravings around the clock thanks to a 24-hour, 7 day a week cupcake dispensing machine, which opened Tuesday on Lexington Avenue, which is located on the Upper East Side of Manhattan.

The 24-hour cupcake ATM is the brainchild of Sprinkles Cupcakes’ owners, Charles and Candace Nelson, who introduced the long-awaited cupcake machine next to their bakery location at 780 Lexington Ave. between 60th and 61st streets. The machine can dispense up to 20 varieties and four cupcakes at a time, they cost $4.25 each, and flavors include red velvet, banana dark chocolate, and cinnamon sugar among others. Additionally, there are offerings for dogs–two mini-cupcakes for $5. Currently, the canine cupcakes come in one flavor, are sugar-free, and have a yogurt frosting. However, there could be more offerings for four-legged consumers on the horizon. Moreover, Sprinkles Cupcakes will also begin to offer cookies and brownies through the ATM next month.

New York City might be the latest home to the 24-hour cupcake ATM, but it is not the original location for the newest innovation in desserts. The California-based company has already opened 24-hour cupcake ATMs in areas of LA, Chicago, Atlanta, and Dallas with great success. Additionally, the company plans to install more ATMs in the New York City area, with a second location planned for the World Financial Center and it is set to open within the next one to two months.

The machine functions via touch screen and operates like a bank ATM–select the cupcake(s) of choice, swipe a credit card, and a robotic arm proceeds to the appropriate location, pulls the cupcake, keeps it level in its brown and pink box, and delivers the tasty treat to the dispensing door for the customer. The ATM holds 760 cupcakes at a time and will be restocked several times a day. Since employees are at the shop baking around the clock, the cupcakes will be freshly baked in the machine. The bakery location itself is open to customers about 12 hours a day. Nelson said he got the idea for the ATM six years ago during his wife’s first pregnancy. He was struck by the fact that he owned a cupcake shop, yet could not satisfy Candace’s late-night cravings for cupcakes because there was no accessibility. The experience inspired him to conceive the 24-hour cupcake ATM concept.

In celebration of New York City being the latest home to the 24-hour cupcake ATM, Sprinkles Cupcakes selected random cupcakes that will have so-called golden tickets in them–reminiscent of the plot from the 1970 classic film Charlie and The Chocolate Factory starring Gene Wilder–that will reward some lucky customers with gift cards for cupcakes and other prizes. Early indications from the opening day have New York City posed as another success for the company’s 24-hour cupcake ATM innovation as freezing temperatures could not deter people from trying the device on its first day in operation. A line of people down the block were consistently present for their chance to operate the new ATM touchscreen and have a robotic arm fetch their tasty treat.

Other Articles Written by This Author: