Tomas Berdych Has Tough Task Ahead Against Nadal 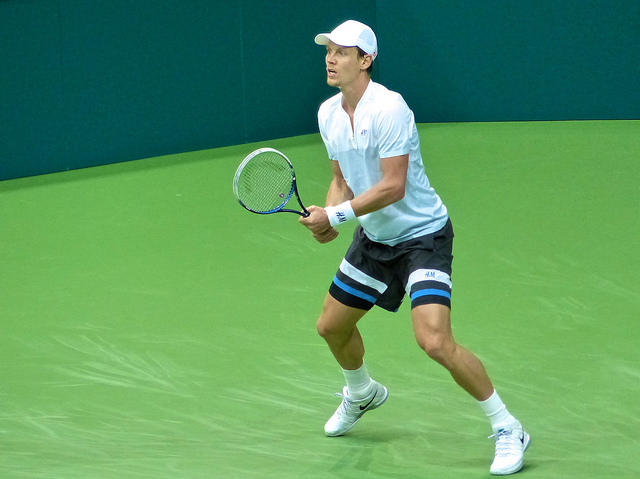 Tomas Berdych faces a hard task tonight against Rafael Nadal in the semi-finals of the Sony Open. The world No.1 Nadal has a 17-3 career head to head lead against the world No. 7. But if ever the time was right for Berdych to start improving his numbers in that stat, it is now.

Berdych is in the form of his career. The Czech has had one of his best ever starts to a season. At the Australian Open, he lost in the semi-finals, but he is unlikely to ever play better and lose again in his career. Had he made a few of the risky second serves he sent down against Stanislas Wawrinka in the third set tiebreak, Berdych might have found himself playing an injured Nadal in the final.

Berdych did not let that loss get to him. He returned to the tour a couple of weeks later and won his first tournament in 18 months in Rotterdam. The indoor court provided the perfect conditions for the Czech’s big ground-strokes and aggressive game to thrive. Both Gulbis in the semis, and then Cilic in the finals, found themselves on the receiving ends of straight sets thrashings.

Berdych, who is prone to losing in the early rounds of tournaments now and then, did not bow out prematurely in his next tournament. He made the Dubai final and led Roger Federer by a set before the Swiss, also in some of his best form for a while, came back and took the title.

Berdych did though go back to losing to journeymen in Indian Wells, losing to 53rd ranked Bautista-Agut in the second round of Indian Wells. But he made up for it this week in Miami, beating tenth seed and homeboy John Isner in the fourth round and then the in-form Dolgopolov in the quarter-finals.

Berdych beat Dolgopolov 6-4, 7-6. The match could have have gone to three, with Dolgopolov leading by a break in the second, but the Ukrainian could not consolidate, managing a low first serve percentage of 48. Berdych had no problems breaking back, holding 9 break points in all, and taking 3 of them.

Berydch’s stats that match tell fans everything they need to know about his game right now. He hit 11 aces, had a 69 percent first serve percentage, hit 26 winners to 20 errors and w0n 69 percent of points at the net. Those stats will have Nadal worried. Although he is one of the worst possible match ups for the Czech, he is struggling with his game this season. The loss in the Australian Open final, the back injury, the third round loss in Indian Wells, and in his last match in Miami, a tournament in which until the last eight he had dropped only nine games, Raonic took him to three sets.

Tomas Berdych may never get a better chance to get a  win against the Spaniard than tonight. It would be his first win over Nadal since his notorious victory in the Madrid Masters quarter-finals in 2006. In that match, Berdych put his finger up to his lips to silence Nadal’s home crowd who were booing after Berdych ripped Nadal apart in straights. Nadal never forgave the Czech for that, not on the court anyway, beating him 16 times in a row, most famously in straight sets in the 2010 Wimbledon final.

But tennis is about who plays better on the day, and on Berdych’s day, he is hard to beat. Right now in his career, he is having some of his best days ever while Nadal is having some of his most off days in a while. He will need one of those to complete the tough task he has ahead of him in Miami tonight. The Star will have plenty of fans wishing him the best. His 79, 400 followers will be hoping to read a tweet thanking them for their congratulations once the task is completed.