Ukraine Must Contend With Radical Groups to Win Western Support 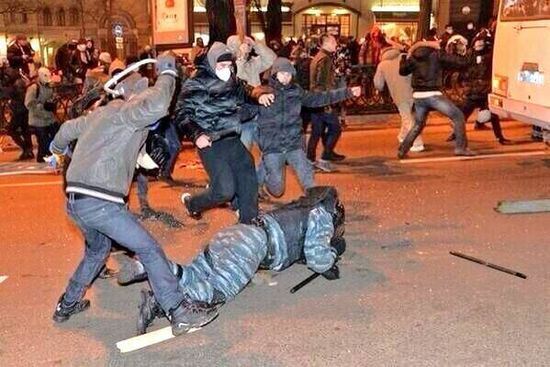 If Ukraine wants backing by western governments and businesses, its leaders need to clamp down on right-wing organizations. Pravy Sektor (Right Sector) is the name given to an umbrella group of far-right radical groups in the country; member groups include “Ukrainian Patriot,” “Trident,” and “White Hammer.” The umbrella group has been among the most mentioned associations causing chaos in the country since before the 2014 uprising ousted president Viktor Yanukovych. To win support from the European Union and United States, Kiev must be seen contending with such enemies of tolerance and progress.

Pravy Sektor communicates with its supporters via the website of the nationalist organization Trident and social media. Following a long tradition across many European countries, Ukrainian far-right parties have found members among various football hooligan “firms.” According to The Scotsman, the word “Sector” often refers to football stands in Ukraine and Russia.

Last month Yanukovych fled, and the country began a trek toward harmony. A truce by the former leader’s supporters and protestors, ended the violence which had left almost 100 people dead; casualties included dozens of police. However, the more radical elements of the opposition did not cease violence.

Many in the Ukrainian radical right look to the writings of nationalist philosopher Dmytro Dontsov (1883-1973). Dontsov, a lawyer, edited several journals and wrote numerous articles on Ukrainian nationalism. Among his hottest criticisms was that of his country’s failure to win independence from Russia. He also voiced very racist ideas, contending that superior races must violently contend with, and conquer others. The Organization of Ukrainian Nationalists, which he influenced, supported the Nazis in massacring members of minority groups such as Jews and ethnic Poles living in western Ukraine during World War II.

The online medium Wall Street Sector Selector relayed a report from Russia Today that estimates over half a million Ukrainians have crossed into Russia following Yanukovych’s ouster. One reason is apparently because of support that Pravy Sektor affiliated parties are enjoying. In an effort to step up resistance to Russian incursion, right-wing leader Dimitri Yarosh has encouraged Chechen rebels to increase anti-Russian violence.

Combine reports of extreme violence with less dramatic, but still damaging issues for the country. During the anti-Yankovych protests, a man calling himself Eugene complained about losing his small consultancy due to government’s mismanagement of the economy. While the ousting of the former president may have been a step in the right direction, progress can be undone via the country run by a reactionary, nationalist party.

The far right leader Yarosh recently stated that liberal Western values promote socialism, atheism, cosmopolitanism, and globalization. He compared the result such ideas to a form “global concentration camp.” Against the background of reactionary prejudice and antagonism, foreign investors will be hard pressed to offer any kind of support, financial or otherwise. Radical political groups, whether they be leftist or rightist as in the case of Pravy Sektor, will regularly discourage outside assistance. One may recall a statement by Winston Churchill to Russian nationalist leaders fighting Bolsheviks; British support would be increasingly difficult to win if the anti-Communist armies did not cease with their anti-Semitic pogroms. Ukraine has won international respect for standing up to Russia’s apparent aggression; now it must prove itself worthy of that support by contending with its own internal aggressors.