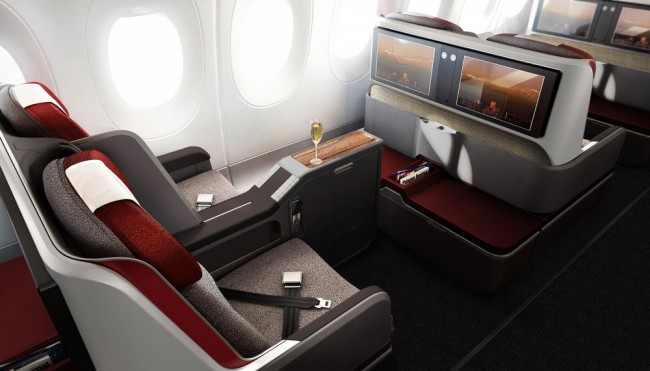 Airbus has been fighting hard to compete against Boeing lately, and it seems that the Netherlands-based aerospace company has been making some major headway. Cancellations have been slowly adding up at Boeing, and the total has reached 40 planes over the past weeks. This means Boeing has 234 current orders to fill, and Airbus has 103. Recent news about Malaysia Airlines Flight 370 has brought much scrutiny to the American manufacturer, as the world continues to watch news unfold about the missing Boeing 777-200 jet plane. Airbus currently sits in a good position to capture more of the world’s market share, and they have put in plenty of innovative effort in order to do so.

The new A350 from the European company sports a sophisticated, modern type of decor. It is meant to compete directly with Boeing’s 787 offerings, and contains much of the same design elements. Both manufacturers chose top-of-the-line seats for business class. The design firm, Prestmangoode, says the colors are inspired from South American examples. Business class has personal television screens, too. Most interesting of all, the chairs convert into fully-functional beds. The European aerospace company and the American one both use these modern seats, but the European version contains more integration of the color scheme and open space.

The two jet manufacturers are in step-by-step lock with each other in terms of basic design elements like chairs. However, the is looking elsewhere for innovation, too.

In the A380, the European company has found a way to increase seating capacity. Airbus is looking hard for non-standard ways of fighting against their rival, Boeing. This move has made airline companies very happy with the new European designs. Through a complicated mix of raising floors and repositioning just about everything, they have managed to squeeze an additional seat into the center of every row. This amounts to a 7 percent increase in passengers, or 30 extra seats for the A380. There is no change in load weight or flight characteristics.

Boeing has been taking notice of its European rival in lock step, and is attempting to increase revenue to compensate. They have focused so far on cutting component costs, which add up to more than 66 percent of their overall costs in the production of jet aircraft. To achieve this, they have initiated a “partnering for success” program. Through the program, they have challenged their parts suppliers to offer large discounts to them as high as 20 percent. In turn, the aerospace company will help the suppliers to produce parts more efficiently. Any parts supplier who rejects the program is added to a “no fly list.” In other words, Boeing will no longer buy from them.

The two big jet manufacturers and airline companies alike are taking an extremely close look at all their particular financial realities. Murdo Morrison of Flightglobal Magazine told CNN “the focus for airlines is economizing and trying to get as many passengers as possible into an aircraft.”

Airbus seating capacity increases have resulted in more A380 sales. As for their rival’s share price, Boeing has been bobbing between $120 and $130 since February. A recent sell-off trend on Wall Street could see more shares pulled out of Boeing during the coming weeks, especially with their principal rival stepping up their game so much. So far, Airbus seems to be making all the right moves as they continue fighting against Boeing hard, and the moves are coming at the right time to steal the spotlight.

One Response to "Airbus Fighting Hard Against Boeing"