Holocaust Remembered by Whom? 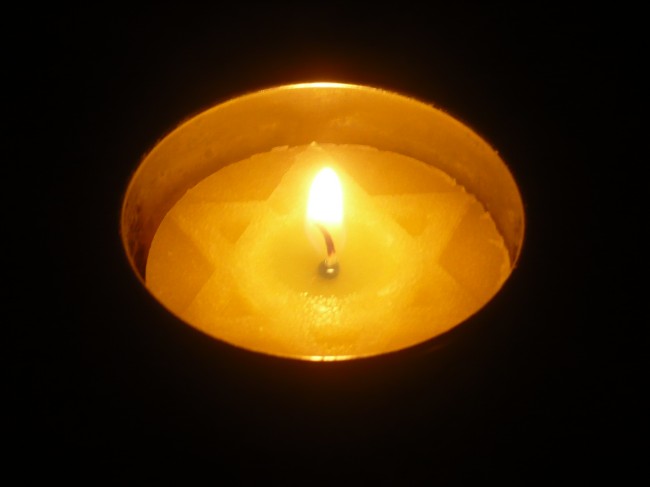 Who cares about the Nazi Holocaust? It was 70 years ago, after all. Yom HaShoah, the Holocaust Day of Remembrance, observed this coming Monday, might come and go without being noticed by the general public. However, there are important lessons to take from this day, and from that unforgettable time of history. These are lessons about justice and tolerance, of how debased human behavior can become, and how people can find a way to reach their higher selves.

Yom HaShoah services focus on memorializing those whose lives were taken, and not so much on the atrocities that caused their deaths. The services are solemn, with memorial yahrzeit candles, poetry, such as from Hannah Szenes (see below), and music, such as Zog Nit Keyn Mol, the “Partisan song,” a Yiddish song which was sung by Jewish partisans in the resistance movement during the war.

There is a saying in the Jewish tradition that to save one life is like saving all of creation. Many risked their lives to do just that, and there is a place in Jerusalem where they are honored. Yad Vashem (literally, the hand of the name) is a museum and educational and research center, serving as a living memorial to the Holocaust. It both safeguards memory of the past as well as imparting meaning for future generations. Righteous gentiles – those who saved lives during the Holocaust – who receive a Yad Vashem plaque are considered to be of the highest distinction.

Never again, and zachor are the two mottos of Yom HaShoah. The word zachor means to remember. It is essential in Jewish tradition to remember what has transpired in the past. This is done in the hope that former mistakes will not be repeated going forward, and to retain in the heart the spirits and lives of those who have passed on. This is especially true if death is sudden and violent, as in the Holocaust, for there is no time to say good-bye.

At the conclusion of every Jewish religious service is the Kaddish (prayer for the dead), which gives congregants the opportunity to pay respect to those who have passed – both those who were part of the circle or family, and as the rabbis say, those who lie in unmarked graves who have no one to say kaddish for them. The kaddish gives mourners an opportunity to not only remember their loved ones, but also to have community support embrace them in their grieving. Having someone say kaddish for a person who has died is of utmost importance in the Jewish religion.

In the words of Hannah Szenes (1921-1944), a Hungarian Jew, national heroine, who parachuted into Yugoslavia during World War II to help save Hungarian Jews about to be deported to Auschwitz “Blessed is the match”: 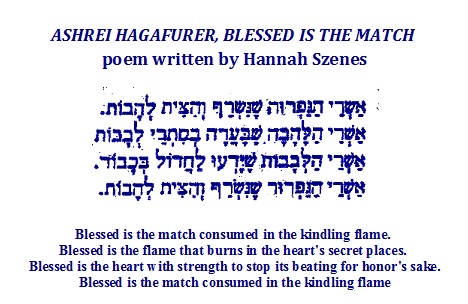 Why indeed remember the Nazi Holocaust? It is to ensure that such atrocities never again occur … to recall the spirits of those taken too soon … and to pay homage to the righteous who risked their lives to save others. According to the honorific for the dead in Judaism, לברכה זיכרונו (zikhrono livrakha) may the memories of the six million always be for a blessing.

One Response to "Holocaust Remembered by Whom?"