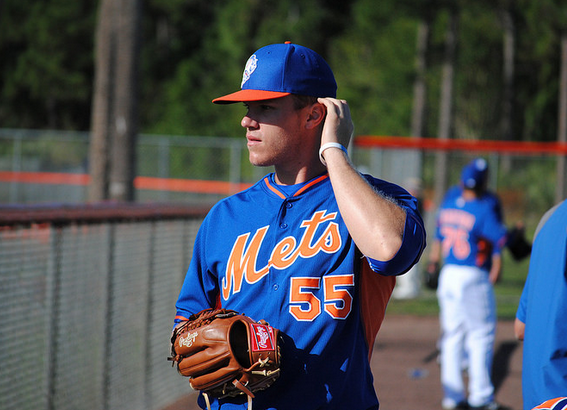 Summer is the time of year when movie studios release their big ticket, massively hyped blockbusters. Fans finally get a look at something they have been anticipating for months or even years. The New York Mets farm system has been following that Hollywood formula. Summer of 2012 brought the highly anticipated Matt Harvey, and 2013 saw the arrival of well publicized Zack Wheeler. In 2014, Noah Syndergaard could be the next summer blockbuster produced by the Mets.

Syndergaard can be an imposing presence on the mound before he even throws the ball. His 6’6″ frame is only exaggerated by the height of the pitcher’s mound. Once Syndergaard winds up, things only get worse for hitters. His delivery is surprisingly easy and compact for a big man, and the ball comes out on a hard downward plane. His best attribute, and the one that has him listed as a top 25 prospect by ESPN, MLB.com, FanGraphs and Baseball America, is the command he has of his fastball. Syndergaard has good velocity, throwing in the mid-90’s with flashes as high as 98 mph, and his long frame allows him to release the ball closer to the plate than someone shorter. Spotting a pitch like that anywhere he wants is what has allowed him to go from A-ball to AAA in a year, and he sits on the precipice of being called up to the majors.

The Mets’ top pitching prospect was acquired along with Travis d’Arnaud in the trade that sent R.A. Dickey to Toronto. At the time of the deal, Syndegaard was a good but much more raw prospect. His biggest asset has always been the well-commanded fastball, but his secondary pitches needed work. After showing a vastly improved curveball to go along with a change-up in 2013, the potential star now has two plus-pitches to go along with a plus-plus fastball. Now set with a major league arsenal in 2014, Syndergaard will be ready soon, if he is not already.

The improvement on Syndergaard’s curve is a big deal for a number of reasons. For one, it shows his ability to learn and improve. He has not stagnated at any level, and is certainly a coachable, malleable project. The other reason is that for Syndergaard to keep leveling up through the Mets’ system he had to improve the offerings behind his fastball. The sharper, harder breaking curve he has been throwing for the past year and a half will make his fastball that much more difficult to hone in on for hitters.

As for how Syndergaard stacks up to the Mets’ last two big pitching prospects, Harvey and Wheeler, there are a number of things that the three have in common. All are big, right-handed starters who have made or will make their debut by age 23, all were first round draft picks, and all have struck out more than a batter per inning in their minor league careers. Projecting how minor leaguers will play out in the majors is a fickle task, but Syndergaard’s ability to improve his skill set and also put up strong statistics against increasingly tougher levels of competition in the minors really bodes well for his future.

Syndergaard should be expected in New York this season, but not until sometime after the All-Star break. Not only is Syndergaard on an innings cap, which is a bit easier to control in the minors, but holding him back until July will allow the Mets to save service time and potentially save a year of arbitration. When he arrives with the Mets, fans will go crazy for the first look at yet another long awaited blockbuster showing. Noah Syndergaard, coming to a mound near you this summer.

One Response to "New York Mets Have a Blockbuster in Noah Syndergaard: Metropolitan Avenue"