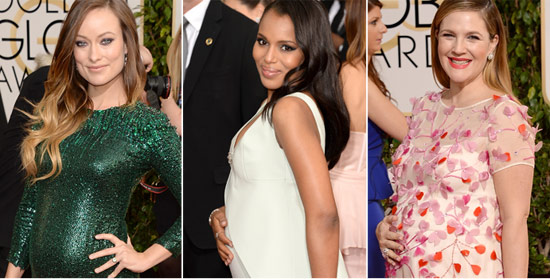 Pregnant celebrities are everywhere right now, contributing to quite a 2014 star baby boom. As these stars show off their baby bellies, or their wives’ bellies, the excitement builds in anticipation of each big day. The rest of the world will wait patiently for glimpses of those famous babies along with their very likely, crazy baby names.

The most recent famous lady to announce her pregnancy is Chelsea Clinton. She is expecting her first baby with her husband Marc Mezvinsky. Christina Aguilera has found love again with her hubby-to-be Matthew Rutler. She announced their engagement on Valentine’s Day this year. A week later, it was reported that the couple are expecting a baby girl. This is their first child together. Aguilera has a son Max, from a previous marriage.

Pregnant celebrity, Kelly Clarkson announced her news on Twitter in November, not long after her wedding to Brandon Blackstock. Then in January, she took to Twitter again to reveal the baby’s gender. “We just found out we’re having a girl officially! I knew it! Only a girl could cause this much drama with all this vomiting ha!” This is their first child together, and Blackstock’s third. He has two children from a previous marriage.

Another pregnant celebrity, Stacy Kiebler, shared news in March, that she and her new husband Jared Pobre are expecting their first child. Their new addition is reportedly, a baby girl. Scarlett Johansson’s pregnancy news came in March as well. She got engaged to her fiance, French journalist Romain Dauriac in September, and the couple wasted little time getting their family started.

The super adorable couple Mila Kunis and Ashton Kutcher, were outed not long ago. Rumors are pointing to a baby girl for the couple, due in October.

Pregnant celebrities Jenna Fischer and Ginnifer Goodwin are strutting their baby belly stuff. Fischer is expecting her second child with her husband Lee Kirk, and Goodwin is having her first baby with her newlywed husband, and Once Upon a Time co-star, Josh Dallas.

Nicole “Snooki” Polizzi and Jenni “JWoww” Farley, get to live out their dream of being pregnant at the same time. Although the now six month pregnant JWoww has had a few scares during her pregnancy, she has gotten through it with fiance Roger Mathews. She and her daughter are both healthy. Snooki is expecting a second child in the fall, with her husband Jionni LaValle.

Olivia Wilde is among the pregnant celebrities and their baby bumps, seen everywhere for the 2014 star baby boom. Wilde revealed her due date of May 4, meaning she and Jason Sudeikis will have their little bundle of joy very soon!

Kendra Wilkinson-Baskett is very pregnant with her second child, a baby girl with husband Hank Baskett, due in mid-May. Their son Hank IV, is excited to be a big brother, revealed Kendra. Another celeb expecting her second child is Kristin Cavallari. She, husband Jay Cutler, and son Camden will add to their family of three. “I mean of course I want a girl,” she revealed, “but another boy would be fun, too,because then Cam would have a buddy.”

Ciara and Drew Barrymore are getting very close to their due dates and showing off some serious baby bellies. Barrymore is expecting her second child, another daughter, with husband Will Kopelman. Ciara and fiance rapper/producer Future, will soon have their first child together.

The pregnant celebrity list just goes on and on…and on! Actress Kerry Washington and her husband Nnamdi Asomugha of the San Francisco 49ers, are quickly approaching their baby’s arrival date. The Scandal star has a great team who cleverly hide her growing belly on the show. Alyssa Milano is pregnant with her, and husband David Bugliari’s second child. Kayte Walsh and Kelsey Grammar are expecting their second child together. Grammer is an old pro at this by now, this will be baby number six for him.

Lil Kim is pregnant, but has yet to disclose who the father is. Jade Jagger, 42, was excited to announce in February, that she is pregnant, and her daughter Assisi, 21, is also pregnant. Mick Jagger will become a grandfather and great-grandfather, with one not long after the other.

These “pregnant” celebrity guys are just as proud to announce their baby news too. Kenan Thompson and his wife Christina Evangeline are expecting their first child together. Foo Fighters rocker Dave Grohl, and his wife Jordyn Blum, will soon be parents to a third daughter together. Christian Bale and his wife Sibi Blazic are expecting their second child together. Their daugther Emmeline, is now 10 years old. Fallout Boy bassist, Pete Wentz, and his model girlfriend Meagan Camper are pregnant with their first child together. This will be baby number two for Wentz. He has a 5-year-old son Bronx, with ex-wife Ashlee Simpson.

The doting dads list continues with Carson Daly. He and his fiance Siri Pinter, are expecting their third child together. They have a son Jack, 5, and a daughter Etta, 19 months. Jimmy Kimmel and his wife Molly McNearney are pregnant with their first baby. The Hangover star Justin Bartha is rumored to be expecting his first child with his new wife Lia Smith. Finally, last but not least, to round out this baby boom list, is David Arquette. He and his girlfriend Christina McLarty, will soon be welcoming their baby boy into the world. This is the second child for Arquette, who has a 9-year-old daughter Coco, with his ex-wife Courtney Cox.

It is clear that a star baby boom is definitely going down in 2014, and everywhere you look, the pregnant celebrities are strutting their pregnant stuff proudly, patiently waiting for the day when their baby makes his or her debut.