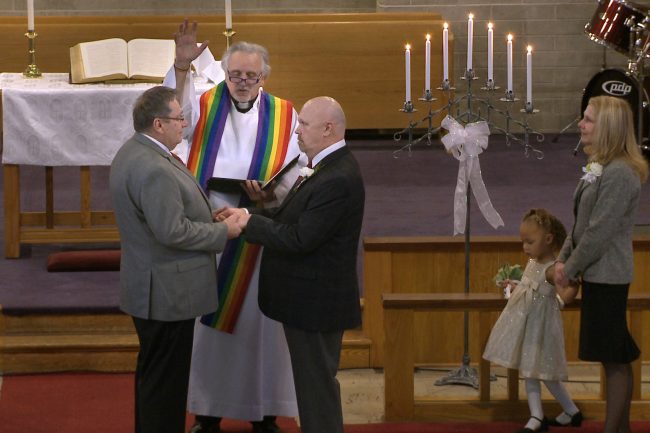 In a very surprising and somewhat ironic turn of events, a lawsuit based on religious freedom has been filed against of North Carolina challenging its ban on same-sex marriage prompting some people to wonder if the world has turned upside down. Is it possible for religion to actually defend homosexuality? Some people argue no, including opponents of the North Carolina lawsuit. But the members of one American religious denomination believe it can and have proceeded to act on that view in the courts. Yes, same-sex marriage is getting defended by a lawsuit over religious freedom and many people will no doubt be wondering how that can be possible.

The United Church of Christ (UCC) has brought this lawsuit to a district court after North Carolina passed what they see as a no-good-very-bad law. This law banned clergy members from presiding over religious marriage services for same-sex couples for which there is no civil marriage license. The UCC, which has supported the legalization of same-sex marriage for many years, claims that this is a violation of their religious freedom. They are duly upset by this limitation on their religious freedom, nevertheless there are some who do not support their outrage.

Prominent conservatives have said very little about North Carolina’s new law, which at face value does violate religious freedom. It inextricably ties religious practice, in this case the blessing of marriages, to the civil marriage license. This means that the state definition of marriage interferes with the religious one that the UCC holds and restricts their freedom to practice their religion as they see fit. Is not religious freedom what social conservatives have been defending the whole time they fought against same-sex marriage? Or was it actually something else?

The lawsuit itself is not what brings this question to the fore, but the response of some conservatives to the lawsuit. The executive director of the North Carolina Values Coalition, Tami Fitzgerald, responded to news of the lawsuit with a press release in which she roundly attacked the UCC. She said that it was “both ironic and sad” that the denomination was effectively using the legal system to “justify” their beliefs, which she believes is religiously erroneous. What is telling about her statement is not her view on the lawsuit, but what she apparently thinks the UCC is doing through it. Namely, she thinks the UCC is using scripture to justify “sexual revolution” and distort “marital sanctity.”

Conversely, Fitzgerald seems to believe that scripture justifies marital sanctity, which is a fine view to take. However, if legalizing same-sex marriage violates religious freedom, what happens when civil law violates the religious freedom of those who believe that gay marriage is religiously allowable? What Fitzgerald seems to be arguing is not civil law and how it defines marriage, but different religious views on marriage. While religious views may inform opinion, they are not generally considered viable when it comes to determining what the law should say. That is part of the function of the separation of church and state. In fact, according to the United States Constitution, there shall be no state law and, by extension, no interference in state law on the part of religion.

For clarification’s sake, religious pluralism is the law of the United States, which means a variety of religions and denominations and religious practices or rituals are legal within the American borders. They are all allowable because no single religious doctrine is part of the code of law. The UCC in North Carolina has every right to challenge a law they feel violates their religious freedom, just as the North Carolina Values Commission is allowed to disagree with them. Should the court determine that the UCC’s religious freedom is violated, then the system works and the separation of church and state has done its job. Basically, that is how a religious freedom lawsuit can actually defend same-sex marriage rather than oppose it.

Yet there are some lingering questions, mostly concerning the religious conservative focus on gay marriage. The UCC lawsuit is important because it is the first lawsuit of its kind – one in which religion comes to the legal defense of homosexual marriage. It is enough to make some people wonder why it has not happened before. There are at least two possible answers to that question. Either religion and same-sex marriage are completely opposed to each other or opponents  only want religious arguments to apply when they agree with the outcome. Obviously, religion and gay marriage are not incompatible or the UCC would not have a leg to stand on. Opinions may vary on whether or not religious conservatives only like arguments that agree with their viewpoint.

It is still early days for this North Carolina lawsuit. Supporters of same-sex marriage will be waiting with bated breath to see the outcome. It could set a fascinating legal precedent for the argument over gay marriage. Opponents will no doubt do what they can to defeat the lawsuit. Regardless, the situation is fascinating, not just for religious reasons but for the political interplay between religion and politics that is on full display. For now, the first religious freedom lawsuit that actually purports to defend same-sex marriage has made history in one of the most ironic and amusing ways possible.