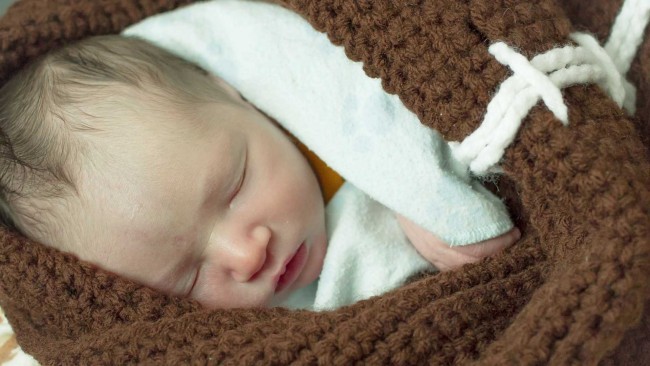 Rachel and Heidi McFarland of Iowa were overjoyed when they adopted baby Gabriel.  They cared for their newborn son until Gabriel’s  16-year-old birth mother, Markeya Atkins, changed her mind about raising her son and took him back from the McFarlands. While watching the news one Wednesday last March, just weeks later, the McFarlands learned that the baby they had been forced to return had died after being left alone in his home the day before.  Gabriel was just four months old.

Gabriel’s father, Drew James Weehler-Smith, 17 and a high school student, has been charged with the neglect of a dependent person and first degree murder. According to police, Atkins had left Gabriel with his father at approximately 7:25 p.m. on April 22 while she ran errands and stopped at the library. When friend Siobhan Williams stopped by the apartment at about 7:55 p.m., she noticed that Gabriel was with Weehler-Smith and was concerned enough to call Atkins to make sure that she was comfortable with Weehler-Smith caring for the baby. At that time, Atkins asked Williams to please go back to the apartment.  As she returned to the apartment, she spotted Weehler-Smith driving away but noticed that the baby was not with him.  She notified Atkins, who sped home, arriving at approximately 8:20 p.m., to find Gabriel alone in a chair, unresponsive and not breathing.  There was a bottle next to him and a ring of some type of white substance around his lips.

Although 911 recordings indicate that Williams administered CPR in an attempt to save the baby’s life, he was pronounced dead at Iowa Methodist Hospital and was later found to have died from massive internal head trauma at the hands of his father. Iowa authorities are not releasing details of how the trauma occurred.

The McFarlands were married five years ago after having been together for 13.  They were excited to adopt Gabriel, and were involved in Atkin’s pregnancy every step of the way, from accompanying her to every one of her prenatal appointments to giving her financial support.  Wary of past reports of adopted children being torn from their parents to be returned to their birth parent(s), they asked Atkins numerous times if she was positive that she wanted to give her baby up for adoption, and every time they asked, Atkins assured them that she was.  The couple was even present at Gabriel’s birth, and Rachel was given the honor of cutting his umbilical cord. The McFarlands brought their son from the hospital to their home. 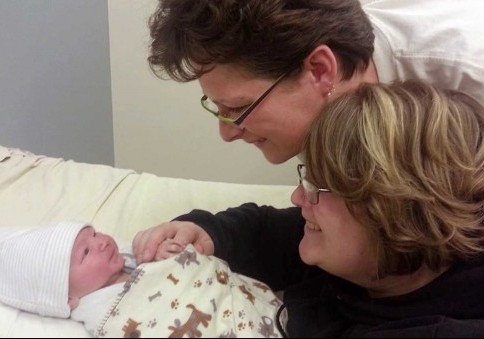 Heidi took maternity leave to spend time with her new son while Rachel says that she was with Gabriel during every waking moment until Atkins decided to renege on the adoption agreement made last September.  Rachel told WHOTV.com that having Gabriel with them “felt natural,” and that they felt with him as though they “were always meant to be moms.”  Because the baby had been born deaf in one ear, the McFarlands had a hearing aid made for Gabriel should he lose hearing in the other ear as well.  They also planned to enroll in sign language courses just in case.

The state of Iowa gives birth mothers three months plus 31 days to allow her to decide not to give the baby up for adoption.  After Gabriel was returned to Atkins, the McFarlands heard nothing until they learned of his death on the news. They are angry because they were put through countless inspections of their home, their friends and their family before they were allowed to adopt Gabriel, yet no such scrutiny was made of his birth mother’s home.  Determined to move on, the McFarlands vow to “put the pieces back together,” even though the pain is great.  Said Rachel, “It’s like he’s been taken away from you again.”

Atkins is said to be devastated by the death of Gabriel and has replaced her Facebook cover photo with a picture of her son.  Officials have no plans to charge her with any crimes in relation to Gabriel’s death. Weehler-Smith is now facing the possibility of spending the rest of his life in prison for first degree murder.  If he is also convicted of child endangerment, a maximum of 50 years could be added to the life sentence, which would greatly diminish any chance of him ever being released.