Los Angeles Kings Get the Kane in Chicago 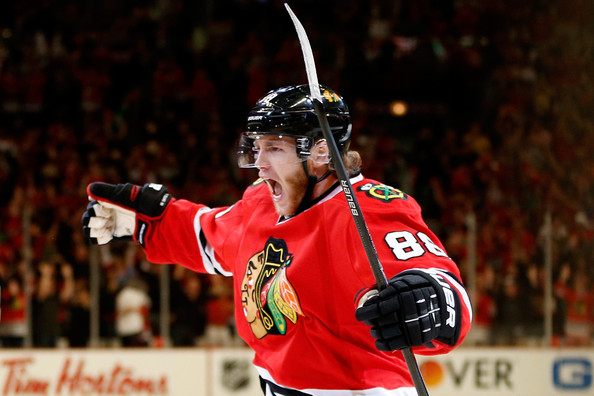 The Los Angeles Kings will have to wait for another night to get their western crown. The Chicago Blackhawks, facing elimination for the first time in these playoffs, were able to squeak by LA in double overtime to force Game six. For the first time in this series, Hawks fans finally saw an appearance from Patrick Kane, as the Kings get thumped in Chicago.

LA was hoping to come out quick in the United Center, silence the crowd and drain the life from the Blackhawks. Chicago, however, are the defending Stanley Cup champs, and it was the Hawks who served up the quick biscuits as they took a two goal lead just over 3:30 into the opening frame. Just over half-way into the period it was 3-1 Chicago, with Kane having assisted on all three goals.

The Kings have proven, though, that they are a team that does not give up easily. They have seen three straight games taken from them in the last two series, so a two-goal lead is not something that should scare the LA faithful. Sure enough, by the time the period was out, Gaborik had netted his league-leading 11th playoff goal of the season – assisted by Kopitar’s 18th assist and 23rd point, both tops in the playoffs – and LA were within one. Twenty minutes later, they had completed the comeback, and Chicago had only 20 minutes of hockey left in the season. If goals were games, LA would be waiting for the Eastern champs already. Instead, the Kings got the Kane, as Chicago stormed back in the third.

Again, the Hawks came out quick, and in less than a minute and a half, the game was tied at four. The next forty minutes were the stuff that fans love to see. Exciting hockey, great goaltending, but no goals being put up on the board. That all changed at the beginning of the second overtime period. For many fans, mercifully, the period ended quickly, as Kane again set up the winning goal, getting the puck in the neutral zone and feeding Brandon Saad, who with three points and a +4 might, just may have had the best game of his career. Saad found a trailing Michal Handzus, and the veteran was able to net his second goal of the playoffs, giving the Hawks another chance to stave off elimination.

Unfortunately for the Hawks, they have to head back to Los Angeles. The road has not been kind to Chicago, who are a dismal 2-6 when traveling. The Kings will now have the chance to book their trip to the Stanley Cup Finals in front of their home town fans, and this would be the first time they get the chance to do that in this years’ playoffs. They will look to use that home-ice energy and advantage to edge what may well be a hopeful but tired Chicago team who will have to figure out how to win a game in LA.

To do so, the Hawks will likely need to get both Kane and Toews putting up multiple points. They will also need a strong outing from Crawford, who looked well off his game in Game Five. If the Blackhawks do not get contributions from these players, one night where the Kings get the Kane will not be enough, and Chicago may well learn a pointed lesson about road hockey in the Staples Center on Friday night.

Commentary by Bryan A. Jones