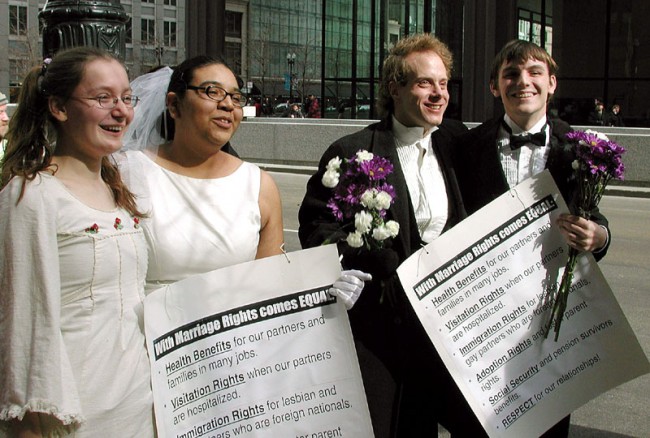 As Arkansas moves towards a future with same-sex marriage, pro-marriage groups predict that Oregon’s 2004 constitutional amendment, Measure 36, is moving closer to the dustbin of history. On May 14, Judge Michael McShane denied the National Organization for Marriage’s (NOM) motion to intervene in the case. NOM wished to stand-in for state and county officials who have declined to defend the amendment. NOM was never named as a defendant in the case.

The Oregon chapter of the American Civil Liberties Union (ACLU) in addition to pro-bono counsel from Johnson, Johnson & Schaller, PC and Perkins Coie, LLP is acting on behalf of the plaintiffs, two couples who claim that Measure 36 is unconstitutional and violates their basic right to equal protection. The case is a combination of two similar cases, Rummell vs. Kitzhaber and Geiger vs. Kitzhaber. The cases were combined in early 2014 since both challenged Oregon’s rule denying the legal status of in-state marriage ceremonies.

The day after the first suit was filed, Geiger, Oregon began acknowledging same-sex marriages from out-of-state. The Oregon Department of Justice ruled that disallowing out-of-state marriages was a violation of the 14th Amendment. The 14th Amendment provides for equal protection under the law. Protecting one sort of marriage but not another seems to be a contradiction which forms the basis of the lawsuit.

The State of Oregon had earlier announced that it will not defend its ban on gay marriage. On that basis, NOM attempted to intervene. Judge McShane denied the motion, indicating that NOM attempted to intervene without notifying the court, and that it was too late to enter the fray. The court will hear oral arguments beginning May 16. Further the judge stated that the case would not be intruded upon by interests from outside of the state.

Pro-equality groups hailed the judge’s stance as a signal that the freedom to marry will soon extend to all citizens of the Beaver State. Multnomah County has already made a statement that it will immediately issue marriage licenses to same-sex couples if the state wins marriage equality. Since the Supreme Court has already knocked down key parts of the federal Defense of Marriage Act, victory for civil rights proponents seems likely.

In fact, Oregon’s Attorney General, Ellen Rosenblum has stated that Measure 36 is indefensible. Her position is that the rule will never be able to withstand a challenge in federal court. Since so many other states are beginning to recognize the legal status of people who happen to be gay, Rosenblum’s case seems less and less controversial every month.

NOM’s literature claims that allowing same-sex couples to marry will redefine marriage for all couples. Their literature encourages followers to proclaim that gay people can live as they wish, up to, but not including, a loving, married life. NOM’s pamphlet, SAME – SEX MARRIAGE? Answering the Toughest Questions, does not offer a rationale behind this exclusion. Followers have no reason to back the stance for why same-sex couples should be denied any part of civil life. However, despite a lack of logical backing for its position, NOM remains strongly opposed to full inclusion of same-sex couples into civil life in the United States.

On May 16, the combined cases of Rummell vs. Kitzhaber and Geiger vs. Kitzhaber will proceed with oral arguments. Oregon is widely seen as a liberal state, mostly due to liberal enclaves such as Eugene and Portland, so many have wondered why the state still does not have same-sex marriage. If civil-rights proponents have their way, this seeming contradiction will be resolved by the courts.