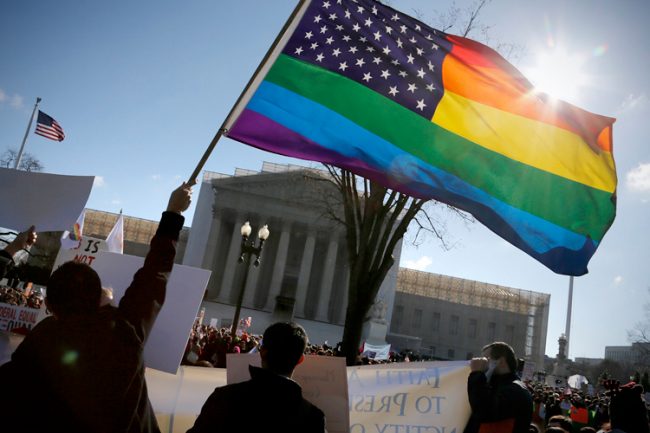 On Tuesday, a Pennsylvania Federal Judge ruled the ban on same-sex marriage unconstitutional, making it two states to strike down the ban this week. The previous day in Oregon, U.S. District Judge Michael McShane also ruled the law unconstitutional, citing violations to the Equal Protection Clause of the Fourteenth Amendments since the ban discriminated against couples sexual orientation with no clear real interest for the government. US Federal Judge John Jones III’s decision ends a 1996 Pennsylvania state law that defined marriage to be between a man and a woman. So far, in both states, neither attorney general has any plans to appeal the decision. This has led many same-sex couples to begin applying for a marriage license in both states.

The decision’s seems to continue a trend beginning in the wake of the Supreme Court ruling that named key federal components on a ban in California last year, to be unconstitutional. Since then, federal judges in 10 states have continued to strike down laws that discriminate on same-sex marriage. The total of states now allowing same-sex union’s stand at 18, as well as the district of Columbia. Oregon and Pennsylvania are the latest two to follow this trend. The states of Idaho, Oklahoma, Virginia, Texas, Utah, Kentucky, Michigan, and Tennessee are currently appealing the decision, although it is expected by next year, one or more of the cases will be brought to the Supreme Court. Until then, all requests for marriage licenses in those states will be put on hold until the case is over.

Despite the appeals, many are seeing the rapid change in public opinion when it comes to pro-gay marriages. About 44 percent of Americans currently live in states that support the rulings to end the ban. The Pew Research Center released a report in 2013 revealing many public opinions on the matter. The report claims libertarian support for the movement as it claims one out of five who previously supported the ban, changed their position due to “government involvement.” It goes on to say about 70 percent of Americans who were born after 1980 support same-sex marriage, with 31 percent of individuals born before World War II supporting it as well. From the University of New York, Patrick Egan, a political scientist at the university, claims the current shift can be attributed to the way same-gender couples are displayed in the media under a positive light more often than ever before. Another factor he finds is young people are less involved in traditional “organized religion” then their parents usually are. Public opinion has shifted so much, that even the media appears to have chosen to support the movement and gives little coverage of the proponents to the same-sex ban. Brian Caneker, a leader of a Massachusetts based organization named Mass Resistance that fights same-sex marriages said, says the media has already labeled any opposition to the repeal as “extremist” sentiment and give little support for such views. This is a stark difference in opinion as it was even a decade earlier.

Two States this week have currently joined the fight for gay rights, and the matter doesn’t seem to be losing momentum. With several federal judges decisions to strike down same-sex marriage bans, and a possibility that many appeals to the decision will make it to the supreme court by next year, the possibility that the United States as a whole supporting same-sex unions has never seemed more likely. Almost 40 years ago in Kentucky, Tracy Night and Marjorie Jones decided to get married only to find the state reject their request. When they sued the state, the case had been decided when the judge claimed “the relationship proposed does not authorize the issuance of a marriage license, because what they propose is not a marriage”. Kentucky is currently one of the states to support same-sex marriages.