By Monalisa Gangopadhyay on May 31, 20142 Comments 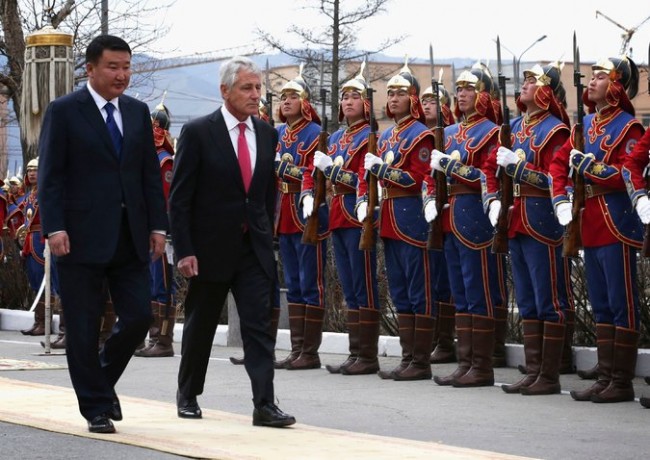 Using exceptionally strong language, U.S. Defense Secretary, Chuck Hagel warned China against taking any destabilizing and unilateral action with respect to territorial disputes with its Asian neighbors. Speaking at  Asia’s largest security forum in Singapore on Saturday, Hagel criticized Beijing for its handling of the regional disputes and asked the Chinese government to moderate its behavior amid the disputes surrounding the South China Sea. The U.S. stance was supported by several other countries, including Japan and Vietnam.

Hagel was making a public speech at the conference in Singapore and reiterated that while the U.S. takes no position with respect to the adversarial claims on the disputed waters, “[t]he United States will not look the other way when fundamental principles of the international order are being challenged. We will uphold those principals.”

Speaking on similar lines on Friday, Shinzo Abe, the Japanese Prime Minister said that his government would support the efforts of Southeast Asian countries to protect their territorial seas and airspace, mostly against China. The prime minister made it a point to offer coastguard patrol boats to  the Philippines and Vietnam, who are in dispute with China over their ocean boundaries.

The two speeches brought quick condemnation from China, which struck back angrily at the U.S. and Japan, accusing Hagel and Prime Minister Abe of acting in concert to sow controversy and division in the Asia-Pacific region. According to Chinese media outlets, Lieutenant General Wang Guanzhong, the deputy chief of staff of the People’s Liberation Army, said that their speeches were “full of hegemony, incitement, threats and intimidation.” General Wang seemed especially annoyed by Hagel’s speech about China’s alleged coercive tactics  because it was was given at the Shangri-La Dialogue (organized by the International Institute for Strategic Studies), a conference about regional cooperation.

Major General Zhu Chenghu, a professor at China’s National Defense University told The Wall Street Journal that the U.S. approach of warning China against taking unilateral action in regional territorial disputes was a “… very, very important strategic [mistake] right now.” Calling the charges groundless, Chengdu accused Hagel of hypocrisy and said, “…whatever the Chinese do is illegal, and whatever the Americans do is right.” Referring to the U.S.-China relationship,  Chengdu said that the U.S. should treat China as an equal partner and not seek enmity with the world’s most populous country.

The South China Sea has been a source of intense tension in the region. In recent years, China has dismissed claims over the waters by Taiwan, Brunei, Vietnam, the Philippines and Malaysia, and has deemed most of the entire oil- and gas-rich South China Seas to be within the country’s boundary. A separate tug-of-war has emerged between China and Japan over islands in the East China Sea. Tensions have also erupted in recent weeks, following the installation of an oil rig by China, in waters that is claimed by Vietnam.

Given the geopolitical drama that has been unfolding in the region, the U.S. warning against China taking unilateral action in territorial disputes raised hackles in Beijing. However, a bilateral meeting between Hagel and Wang after the rapid exchange of words, earlier in the conference, was said to be “businesslike and fairly amicable.”