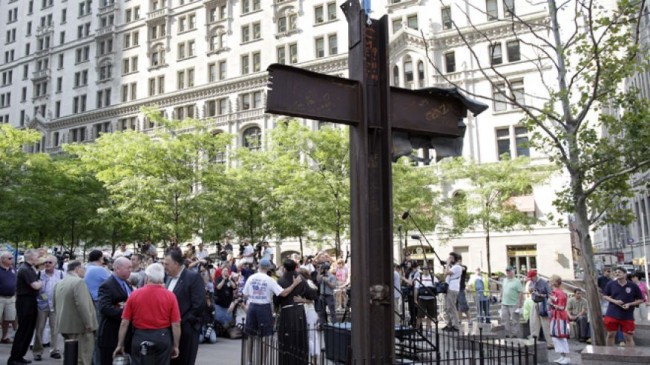 American Atheists Group (AAG) is claiming, again, that the 9/11 Ground Zero Cross is offensive and this week a federal appeals court wants to know specifically why the group thinks so. Previously, in 2011, the AAG filed a lawsuit to keep the cross from being displayed claiming the 9/11 artifact violates the constitutional rights of atheists and was causing people to suffer from anxiety, depression, “mental pain and anguish” and indigestion. That case was thrown out in early 2013 by U.S. District Court Judge Deborah Batts who stated that the cross represented both a secular and historical purpose and the AAG has filed an appeal. The federal appeals court has asked the AAG to back up their claims that the cross excludes atheists from being recognized as part of the tragedy and endorses Christianity. The court has given the group until July 14, 2014 to provide further briefs on how the cross is “offensive” and represents “constitutional injury.”

It has been more than a decade since America was attacked by the radical Islamic terrorist group al Qaeda led by terrorist mastermind Osama bin Laden and in May of this year, the National September 11 Memorial Museum finally opened in New York City. The Ground Zero Cross is a significant part of the museum because after the attacks it became a symbol of hope to the grief-stricken in New York, the nation, and even across the globe.

Considered the worst terrorist attack in United States history, the three-pronged assault resulted in the deaths of 2,977 people in several locations. One hundred and eighty-four people died at the Pentagon, 40 heroes died in Shanksville, Pennsylvania after sacrificing their own lives to divert United Airlines Flight 93 and 2,753 people were killed at the World Trade Center site in Lower Manhattan. The Memorial Museum contains artifacts collected from that tragic day and includes a 17-foot tall intersection of steel I-beams from the Center’s North Tower – an artifact that became known as the Ground Zero Cross. Images of the Ground Zero Cross have been emblazoned on all sorts of everyday items as well and the image serves to memorialize the people lost to the terrorist attack. The image was often seen on the gear of soldiers fighting in Iraq and Afghanistan and even tattooed on the flesh of those who lost loved ones or were fighting to protect the nation.

Eric Baxter is the Senior Counsel for The Beckett Fund for Religious Liberty, which is a non-profit legal firm “dedicated to the expression of all faiths.” According to Baxter, the cross does not just represent the Christian faith.

And it wasn’t just Christians. Many of other faiths or no faith at all — despite finding no religious significance in the steel crossbeam — recognized and shared the hope and strength it inspired.

Baxter’s brief against the AAG argues that the group has no grounds for their case claiming that while separation of church and state is one thing, “separation of religion and history” is another. He further states that the courts should not allow a group to file a lawsuit because they “claim to get ‘dyspepsia’ over a historical artifact.”

As it stands, the Ground Zero Cross is now a significant part of the 9/11 National Memorial Museum – a museum that is “An educational and historical institution honoring the victims and examining 9/11 and its continued global significance.” Previously the federal court dismissed the American Atheists Group’s lawsuit that claimed the Ground Zero Cross was offensive and marginalized atheists on the grounds that, “no reasonable observer would view the artifact as endorsing Christianity.” It remains to be seen if the AAG can convince the federal appeals court otherwise. Meanwhile, the Ground Zero Cross will continue to serve as a symbol of the great loss Americans suffered on September 11, 2001 and also as a reminder that hope is eternal for people of all faiths, or no faith.